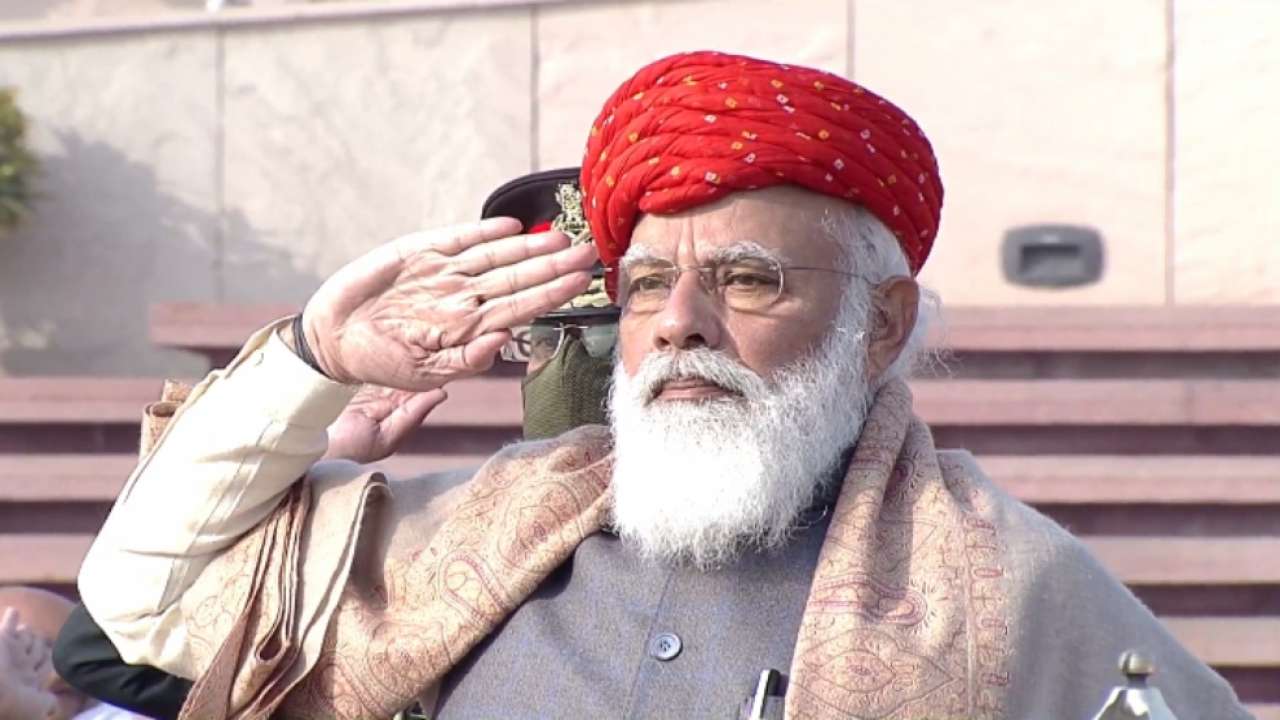 On the occasion of the 72nd Republic Day, Prime Minister Narendra Modi sported a special Jamnagar turban as a part of his traditional attire during the celebratory Parade.

Continuing his annual tradition of sporting special traditional turbans during Republic Day celebrations, PM Modi wore ‘Halari paghdi’, a red turban with yellow dots, gifted to him by the royal family of Jamnagar, Gujarat. Along with the turban he was seen wearing his traditional kurta, pajama, and grey jacket along with a face mask.

The royal family of Jamnagar holds special respect globally. In one of the defining acts of humanity during World War 2, the king of Jamnagar, Maharaja Jam Saheb Digvijay Singh, had saved 1000 children from Poland during World War 2. Poland still cherishes this gesture of Jamanagar’s erstwhile King.

The PM had also extended greetings to the nation on the special occasion. “Wishing all the people of India a Happy RepublicDay. Jai Hind!” PM had tweeted.

Wishing all the people of India a Happy #RepublicDay. Jai Hind!

Modi’s sartorial choices have made headlines on many occasions – from his headgears for Republic Day celebrations to the suit printed with his name – he surely knows how to stand out. For his maiden Independence Day address as the PM in 2014, he had opted for a Jodhpuri bandhej turban in bright red colour with green at the tail.

During the Republic Day celebrations last year, the PM had worn a saffron bandhej headgear with a tail. In 2019, he had worn a yellowish-orange turban which had a red tail.

Republic Day is celebrated in India every year on 26 January to commemorate the day the Constitution of the nation came into effect. Though we gained independence on August 15, 1947, nascent India did not have its own laws which were drafted and finally adopted in the year 1950.

As the nation celebrates Republic Day, also known as Gantatra Diwas, a parade of many firsts was held in the shadow of Covid, featuring a fly-past of Rafale fighter jets, the first tableau from Ladakh and a contingent of Bangladeshi armed forces.