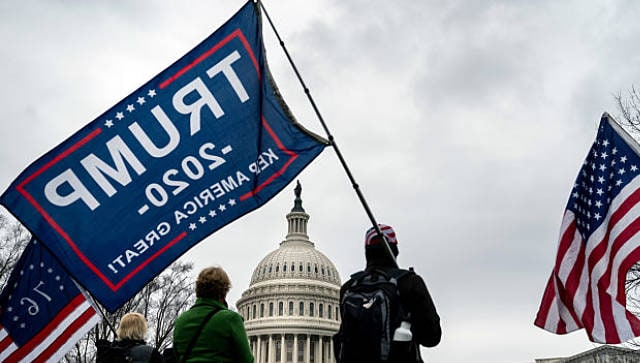 Washington: Congress anxiously prepared on Tuesday for a marathon session to formalise President-elect Joe Biden’s Electoral College victory, after Republican loyalists to President Donald Trump confirmed they would object to the results of at least three battleground states the Democrat won.

Senators Ted Cruz of Texas and Tommy Tuberville of Alabama planned to object Wednesday to the certification of Arizona’s electors; Senator Kelly Loeffler of Georgia intended to object to those from her state; and Senator Josh Hawley of Missouri planned to object to Pennsylvania’s slate, according to people familiar with their plans.

Their challenges were all but certain to fail amid bipartisan opposition. But their decision to join House Republicans in seeking to overturn the election ensured that Congress would be thrust into a caustic debate over the results and Trump’s repeatedly debunked claims of widespread fraud and irregularities that could last nine hours or more.

It will culminate in at least three votes that have already badly divided the Republican Party, forcing lawmakers to go on the record either siding with the president or upholding the results of a democratic election.

Lawmakers anticipated possible objections for up to three additional states — Michigan, Nevada and Wisconsin — although it was not clear whether they would draw the requisite backing from a member of both the House and the Senate to be considered.

At the White House, Trump continued an extraordinary pressure campaign on Vice-President Mike Pence, who will oversee the joint session as president of the Senate, urging him to move unilaterally to reject electors from battleground states that he lost. The president wrote on Twitter that Pence had “the power to reject fraudulently chosen electors.” Under the Constitution and the statute governing the counting, he does not. In any case, all 50 states have properly certified their electors as legitimate.

Around Capitol Hill, the mood was tense as lawmakers and their aides tried to game out eventualities that neither party has had to seriously consider in more than a century. With supporters of Trump already massing in Washington to protest the outcome, the police erected a protective security perimeter around the Capitol and advised lawmakers to use a network of underground tunnels to get to and from their offices Wednesday.

Just outside the perimeter, a group of around 20 constituents clad in Trump gear surrounded Senator Kevin Cramer, R-North Dakota, and pressed him to explain his decision to accept the results of what they called a “fraudulent” election. Cramer stood firm, saying he could not in “clear conscience” go against his reading of the Constitution to give another term to Trump. Several people in the group left downcast, but not before holding their hands out to Cramer to offer a prayer that the country not “crumble.”

With notable exceptions, Republicans in the House and the Senate appeared to be roughly diverging into two camps. House Republicans were preparing for as many as 70 percent of their members, potentially including the top party leaders, Kevin McCarthy of California and Steve Scalise of Louisiana, to vote to throw out election results in key battleground states.

The ringleader of the effort in the House, Representative Mo Brooks, R-Alabama, wrote on Twitter that 36 House Republicans had already agreed to sign onto objections to all six battleground states under discussion.

Instead, more Republican senators came out Tuesday against attempts to undermine the results, bringing the total proportion that will vote to finalize the results as cast to about half of their Senate contingent. The number was expected to be closer to two-thirds when the roll was called Wednesday. Senator Mitch McConnell of Kentucky, the majority leader who had discouraged senators from objecting, planned to claim the first speaking slot after Cruz’s objection, according to a person familiar with his thinking, setting the tone for the day.

Those senators who were preparing to object largely avoided the extreme language coming from Trump and House allies. For instance, Cruz, a possible 2024 presidential candidate, cast his objection not as an attempt to overturn the election results but to draw attention to a futile call to create an independent commission to audit election results.

“We are going to vote to object to the electors, not to set aside the election — I don’t think that would actually be the right thing to do — but rather to press for the appointment of an electoral commission that can hear the claims of voter fraud, hear the evidence and make a determination as to what the facts are and the extent to which the law was complied with,” Cruz said Monday evening in an interview with conservative radio host Mark Levin.

Many of his Senate colleagues were unpersuaded.

“Voting to object to the electoral process without a constitutional basis to do so may be expedient and lead to short-term political benefits for some, but would risk undermining our democracy — which is built upon the rule of law and separation of powers,” said Senator Jerry Moran, R-Kansas, who is up for reelection next year.

Senator Tim Scott of South Carolina, a rising Republican star, said that he disagreed with his colleagues objecting “both in principle and in practice.”

“One of the great things about democracy is there will always be another election,” he said.

Senator James M. Inhofe, a long-serving Oklahoma Republican who is the chairman of the Armed Services Committee, said he viewed challenging any state’s certification as “a violation of my oath of office.” And John Boozman, a quiet Arkansas Republican, said he would not help “erode the ideals that generations of Americans have fought to protect simply because we do not like the outcome of the election.”

Democrats, appalled at Republicans’ willingness to challenge the duly certified vote of the people, were carefully preparing their own defense of the election results. House Speaker Nancy Pelosi has tapped four trusted Democratic lawyers with experience arguing constitutional matters to help lead the party’s response — Representatives Adam B Schiff of California, Zoe Lofgren of California, Jamie Raskin of Maryland and Joe Neguse of Colorado.