Rescued Nigerian schoolboys brought back to families in state capital 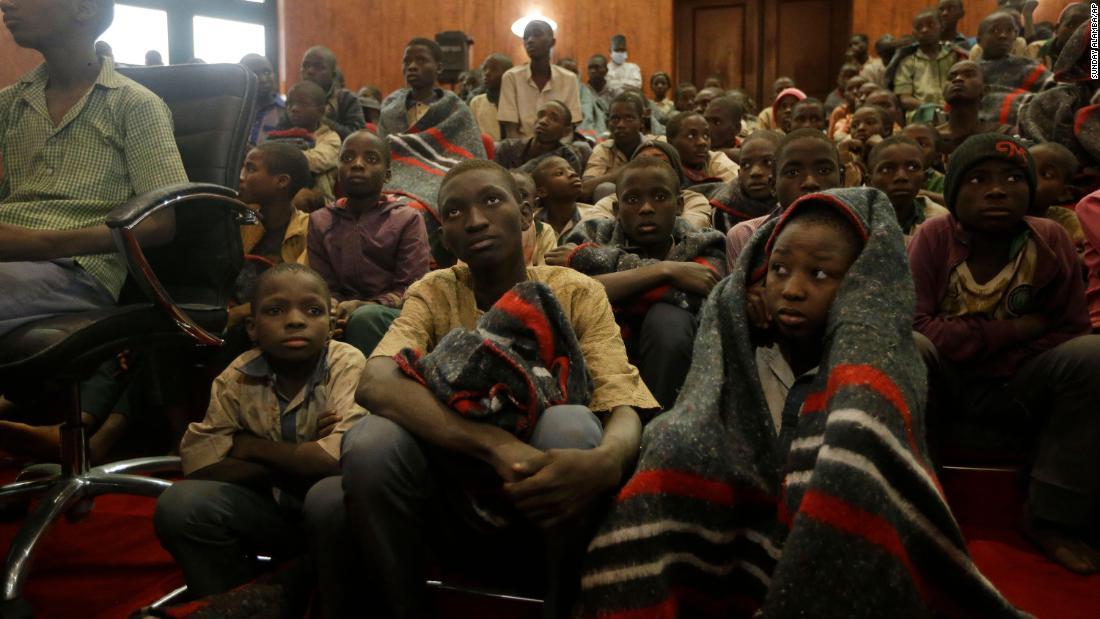 “They took us into the forest, we walked for two days without having anything to eat and they were beating us,” 14-year-old Murtala Sale told CNN.

“Some [of us] felt sick because we had not eaten for the two days, they selected the sick ones and gave them food to eat,” he added.

The children, many with blankets and covered in dust, arrived on heavily guarded buses before disembarking and walking barefoot past lines of palm trees into the building named after the Nigerian president, Muhammadu Buhari.

More than 300 schoolboys were kidnapped in the attack on December 11 on the Government Science Secondary School Kankara in Katsina State. The Nigerian military rescued 344 of them late on Thursday, and they were received at the state capital by governor Aminu Bello Masari.

The boys sat silently in front of microphones in a theater while Masari spoke to the press.

“I will also use this opportunity to praise and thank the efforts made by the entire security apparatus,” he said. “To the parents, I think let’s thank Allah for his mercies, we have never given up hope.”

It was a memorable day for the state and the boys, he added, suggesting that the kidnapping should form part of their “history” and “journey to adulthood.”

A 13-year-old boy named Jamilu Suleiman said the kidnappers took the boys to a forest, where they spent days walking.

“They usually give small children guns and sticks to beat us just to display and satisfy their price. They gave us bread, a single groundnut cake, for the entire day,” he added.

Ashiru Malumfashi, a father of one of the kidnapped children, said he was traumatized by the abduction and the condition of the children.

“But the way the government has shown concern on the matter, we thank them and we hope that we don’t get to see this happen again.”

Masari’s spokesperson, Abdu Labaran, told CNN on Thursday that Boko Haram was not involved, but rather the boys were kidnapped by bandits masquerading as the Islamist terrorist group.

CNN has not been able to independently verify this.

Nigerian President Muhammadu Buhari greeted the news in a statement posted to Twitter, saying: “This is a huge relief to the entire country & international community.”

Buhari also asked citizens to be “patient and fair” to the government amid fierce criticism of the country’s persistent security issues.

Earlier in the week, a man claiming to be Abubakar Shekau, a leader of one of Boko Haram’s factions, said his group was responsible for the kidnapping in a short audio message and video which showed the children.

Masari has dismissed these messages and said instead that “local bandits” were “mimicking” his speech.

Unicef, the United Nations agency responsible for providing humanitarian aid to children, said that far too often in Nigeria, children are the “target of attack.”

“Attacks on educational facilities are a grave violation of children’s rights,” said the agency’s Nigeria representative, Peter Hawkins, in a statement on Friday. “This incident is a disturbing reminder of the heavy toll that violence takes on civilians in north-west Nigeria, including children.”

While kidnapping for ransom by criminal elements has become more common, an abduction of this scale is unheard of in Katsina State. It recalls the brutal kidnapping of 276 girls from Chibok in 2014 by Shekau’s group. More than 100 of those girls never returned home.