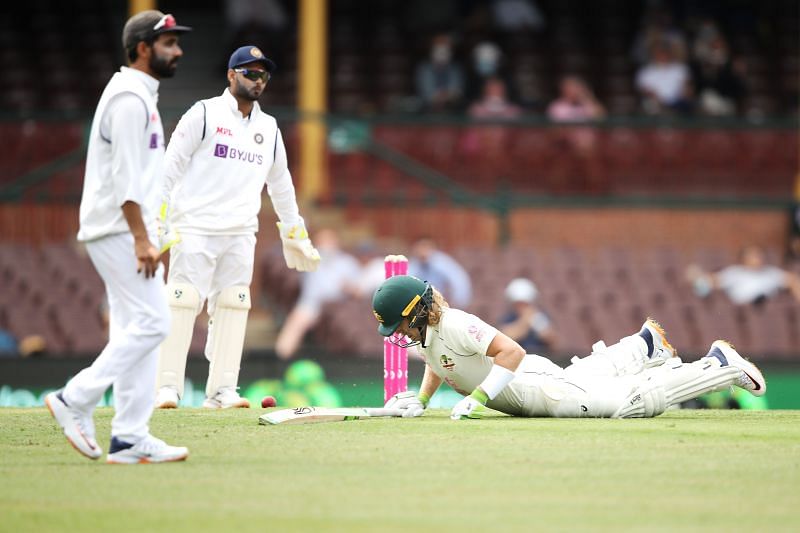 Australia went into Tea in a great position, as India failed to pick up a wicket in the second session on Day 1 of the third Test. Will Pucovski and Marnus Labuschagne showed great composure to build their innings and spend time at the crease, with the former scoring a half-century on debut.

India would kick themselves for not taking their chances. Rishabh Pant missed a couple of catches, with the visitors also missing out on a run-out opportunity.

After a lengthy rain-hit delay, players finally returned to action. India stuck to their tactic of attacking the stumps along with the occasional short ball, in a bid to get the better of the Australian batsmen.

Indian bowlers continued to look for the LBW against Pucovski, as Jasprit Bumrah and Mohammed Siraj targeted his pads. But the debutant looked solid in defence, as he got into his stride and saw off the threat from the Indian pacers.

Marnus Labuschagne, on the other end, was assured at the start of the innings too and was his usual busy self at the crease.

As has been the case this series, Australia were happy to be patient when it came to scoring runs. The home side scored just 23 in the first 10 overs of the second session, as they continued to frustrate the Indian bowlers.

As was the case in Melbourne, Ajinkya Rahane brought on Ravichandran Ashwin early to get a breakthrough. However, the trick didn’t work this time, as the spinner didn’t find the turn and bounce he got in the Boxing Day Test.

The complexion of the match could have been completely different in the 22nd over, had Rishabh Pant held onto a simple catch of Ashwin’s bowling. Pant dropped the catch, thus handing Will Pucovski a lifeline in an act that will surely attract debate on his wicket-keeping skills.

Australia’s cautious approach paid off, as Pucovski and Labuschagne brought up their 50-run partnership in the 24th over.

Rishabh Pant’s day went from bad to worse, as he dropped Will Pucovski again, this time of Siraj’s bowling. India thought they had gotten their man, after the fast bowler’s bouncer caught the Australian’s glove, as Pant completed a catch running back. But replays showed that Rishabh Pant failed to get his hands under the ball in the second attempt. The ball touched the ground, and Australia’s debutant survived again.

Australia kicked on their scoring rate from there on, as they attacked a tired Indian bowling attack. Both Labuschagne and Pucovski got in the act, as they played some great strokes.

India could have had a fortunate run-out, after a miscommunication between the two Australian batsmen. Pucovski wanted a third run but was stranded after Labuschagne’s call. However, Jasprit Bumrah slipped as he attempted to collect the ball, with Ashwin’s tame relay throw not being enough to complete the run-out.

It was time for Navdeep Saini to finally bowl for the first time in Test cricket in the last over before lunch. Pucovski greeted the debutant with consecutive boundaries, as he brought up a half-century on his Test debut.

Australia go into Tea as the happier side. With both batsmen set at the crease, the hosts will look to kick on and put up a big total. Ajinkya Rahane, on the other hand, will hope that the break provides the Indian bowlers with some answers on how to get the better of the Australian batsmen at the Sydney Cricket Ground.