Rico Nasty On Nightmare Vacation, Naruto, And Never Rushing Herself 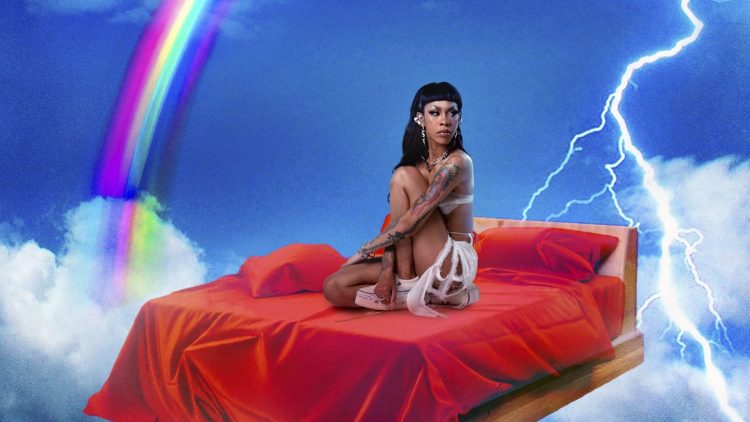 The rapper Rico Nasty has at least two tattoos of herself, one on each arm. On her right shoulder sits an inked-in rendering of a pink-haired selfie taken to commemorate her first visit to the Sony Music offices following the release of her third mixtape, Sugar Trap, in 2017. Her left forearm bears an image of a cartoonish black-and-white figure, less a portrait and more a persona — feisty, with spiked hair and a jagged smile — that made an appearance in the music video for her clanging single “OHFR?”. In it, Nasty wears fishnet stockings, vampiric black makeup, and a patched leather biker jacket, stomping and growling and swinging a miniature guitar like a battle axe.

That fondness for shapeshifting self-definition has left a trail of mixtapes released as various alter egos, starting with Summer’s Eve, which she dropped in 2014 while still in high school. But the characters, she explains, are just part of the whole that is her turnt-up debut album, Nightmare Vacation. There’s Tacobella, the pop star who sings in electronics on “iPhone,” a hyperpop-leaning track with a nostalgic 8-bit twang courtesy of 100 gecs’s Dylan Brady, who also produced “OHFR?”; and Trap Levine, a pissed-off punk whose rage against the system and ex-boyfriends might lead her to literally “Smack a Bitch.” What was once rumored to be a response to a physical altercation with a former collaborator, the single, which was first released in 2018, becomes a tribute to female empowerment with the help of emerging rappers ppcocaine, Rubi Rose, and Sukihana.

During a recent Zoom call, the 23-year-old mom from Maryland, born Maria Kelly, is decidedly more turned down. Ahead of the release of Nightmare Vacation, her Los Angeles hideout — where she has been quarantining during the ongoing pandemic — has seen a steady stream of packages touting new merch and makeup; Nasty, whose occasionally over-the-top glam has become a popular subject for recreations by fans online, has recently joined the conversation, crafting makeup tutorials using her own line of eyeshadows and liners with Il Makiage and sharing them to YouTube. As she sits down to speak with MTV News, wearing a tie-dye T-shirt and a blonde and green split-color wig, she tears into one bag with her teeth, before realizing her folly. “It’s coronavirus,” she says, “and I just put my mouth on this package.”

MTV News: I first saw you perform — it seems like it was 5 million years ago now — at a runway show in September 2019. Around that time you released the song “Fashion Week,” and now you have your own makeup line, as well. How does your sense of style factor into who you are as an artist?

Rico Nasty: Oddly enough, everything just falls into place. I’ve always been a creative person, so when it came to makeup, it just flowed right in. Everybody knows I love makeup. And I also like making people feel beautiful and shit like that. When I started getting acknowledged for my makeup looks with recreations by fans, that’s when I was like, I should really do something that will make my fans proud.

MTV News: You’ve done a few of your own makeup tutorials. Do you watch them, as well?

Rico Nasty: I do watch YouTube tutorials! I had dropped one for Il Makiage. I did the Vogue “Beauty Secrets.” I would definitely get into it if I had more time. I don’t have time. I’m a mom, so that keeps me pretty busy. And sometimes when I’m trying to do tutorials, [my son is] popping in and out and making it real hard.

MTV News: What are the differences between the personas you’ve developed over the years, Trap Levine, Tacobella, and then Rico Nasty herself?

Rico Nasty: Tacobella is melodic — she sings. Trap Levine is a rock star, and Rico is just the rapper. I haven’t come up with a name for a character or a personality in a really long time, because I feel the ones that I’ve made are fine. I don’t need any more. I’m definitely growing up and there are new aspects that I would like to add to my characters. I feel Tacobella might also be a pop star because she’s definitely on “iPhone.” Rico might know how to sing a little bit, but not a lot, and that’s why she’s on “Own It”. But it’s more swaggy. It’s not screaming. That’s Rico. And going crazy, going dumb songs like, “OHFR?” and “Rage,” “Trust Issues” and “Smack a Bitch,” that’s Trap Levine.

MTV News: One of your breakout songs was “iCarly,” then later you had “Hey Arnold.” On “iPhone,” you rap about Tamagotchis, and for me, all of this feels very nostalgic. Why is that imagery something you insert into your music?

Rico Nasty: Childhood things and things that are nostalgic that remind you of growing up, they allow you to be more free. Most have great memories tied to them. The first time I had a Tamagotchi, that was my first example of a pet. I reference that ‘cause I’m talking about a relationship, and sometimes that relationship can feel like you have a pet. Somebody’s on your hip all the time. And then mine would always die.

Rico Nasty: I would accidentally have them in my pocket and get my clothes washed — on my key chain and my pants be inside out.

MTV News: Are there any cartoons or animes you’d want to show your son?

Rico Nasty: Obviously, Naruto and Dragon Ball Z, I would love to show him. But the anime I watched was very girly, Fruits Basket, and I also watched Chobits. And I’m not going to say I’m an anime fanatic, but I had an anime phase. Definitely during quarantine I started rewatching Chobits, because I just feel it’s the cutest love story ever. Everybody deserves a Hideki.

MTV News: What is the biggest difference between Nightmare Vacation and your previous mixtapes?

Rico Nasty: I did not let my fucking fans rush me to make it be out. I was like, no, it’s not done, I promise it’s not done. I trusted myself and I didn’t rush nothing. I didn’t rush making one song on there. When you don’t drop music for a really long time, I feel you’ll always grow. So I’m really happy for you all to hear the growth.

MTV News: One of the biggest departures I heard was in your collaborations with Dylan Brady on “OHFR?” and “iPhone.” In a way, your sound as a rapper is extreme, so to mix it with the extreme of hyperpop is really interesting. Why were you excited to work with Dylan?

Rico Nasty: Music shouldn’t be about thinking. When I first heard his music, I just felt free, and that’s what attracts me to collab with people. Their music makes me feel it’s just a bright sunny day, my head in the clouds, having fun, or nostalgic. His shit made me feel like I was 13 again, and the ability to make people feel forever young is very rare. And I love Dylan. From the first time we ever met, he never was trying to do anything. It would be weird because there are very few conversations that can say I’ve had with them. When we get in the studio, we work straight like that. He’s always touching that damn computer and I’m always in the booth. And we’re just going, going, going, going. I always think it’s important when you collaborate with a producer for them to bring you into their world, to things they like and they’re known for. But it’s also very important for you to bring them into your world as an artist. And I think we did that.

MTV News: Was there any moment where you knew you wanted to become a musician?

Rico Nasty: I always wanted to be a musician, ever since I was a child. But I just didn’t think that I was good enough, or pretty enough, or all of the things that people put on themselves to think that they can’t be famous. I feel anybody could be famous. When I started getting label calls and stuff, realizing my music had worth, that’s when I was like, “OK, fine.”

MTV News: And now you’re releasing your debut album with Atlantic, which is so major! How do you manage to pursue that dream while also being a mom?

Rico Nasty: It doesn’t feel there’s any other way to do it. You know what I’m saying? This is what I’ve been doing. So this just my life. But I wouldn’t say it’s not hard to balance. It gets tricky sometimes because you have to be gone. Even with coronavirus, I still had to leave a couple of times this year — I guess he’s even harder now because I’m hearing all the time now he misses me more. But, yeah, I feel people think that it’s so difficult, but just imagine if your mom had a job and she just didn’t work at a desk. And it is pretty fun being my son, I can’t lie. We lit in here. But I don’t want him to know that I’m famous or none of that.

MTV News: Do you show him your music?

Rico Nasty: Yes, he listens to my music. He comes to the studio. He’s there for videos. I’ve always been protective of my son and I’ve never been the type, like, “On set, my baby’s on set.” Like, bro. He don’t want to be on camera, bro. He just be like, “I’m on my iPad, I’m running my business.”

MTV News: Also on this album, you have a new version of “Smack a Bitch” with ppcocaine, Rubi Rose, and Sukihana. Why did you choose to collaborate with those artists, specifically?

Rico Nasty: They speak for all different types of girls. ppcocaine is the TikTok girls. She’s also bisexual. And I feel those people oftentimes get ignored or placed off. Rubi Rose is the pretty, slim, thick IG bitches. And Sukihana is for the ratchet bitches. And she’s also a mother. So I love everything that she do. She really doesn’t give a… And, I feel, obviously, let me say something. When you’re young and you’re 15, 16, 17, yes bitch, you need to be giving a fuck. But when you are grown, you got kids, you got bills, you got experience. You’re not just going off of some shit you’ve seen on Instagram.

MTV News: Is there anyone you dream of working with next?

Rico Nasty: I love Cardi B. I love City Girls. I love everybody right now. Everybody’s doing their thing and just putting out heat, so I guess it’s limitless at this point.