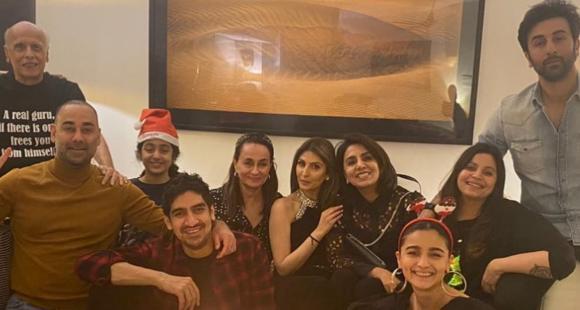 Riddhima Kapoor Sahni, who just returned from Rajasthan, has shared an epic and happy picture of the Kapoor’s and Bhatt’s and it’s unmissable.

Riddhima Kapoor Sahni, sister of Ranbir Kapoor, is an avid social media user and also enjoys a huge fan following. She is always sharing happy moments of the family with her fans. And today also she shared another very beautiful moment on her Instagram handle. Both Kapoors and Bhatts celebrated the new year together in Rajasthan and their pictures from the vacation have already created a buzz on the internet. Ranveer Singh and Deepika Padukone also joined them on the trip later.

The picture, clicked during Christmas celebrations, features Alia Bhatt, Mahesh Bhatt, Soni Razdan, Shaheen Bhatt, Neetu Kapoor, Ranbir Kapoor, Riddhima Kapoor Sahni and her daughter as well as director Ayan Mukherjee. It is almost a dream to see them together in one frame. Riddhima captioned the picture as ‘Love’. It was during their trip to Rajasthan, speculations started that both Ranbir and Alia will get engaged. However, there was no official confirmation and later all reports were dismissed by Randhir Kapoor. He said that no engagement is taking place right now.

Recently, Riddhima Kapoor had also shared a heartfelt post for her grandmother on her birth anniversary. She wrote, “Always in our heart! Love you Miss you,” followed with a heart emoji.

Check out the epic family photo shared by Riddhima:

Ranbir and Alia will be seen together in the film Brahmastra which also stars Amitabh Bachchan, Mouni Roy, and Nagarjuna Akkineni in pivotal roles. Alia Bhatt is also gearing up for Sanjay Leela Bhansali’s film ‘Gangubai Kathiawadi. The film is expected to release this year. It has been adapted from one of the chapters of author Hussain Zaidi’s book, “Mafia Queens of Mumbai”.