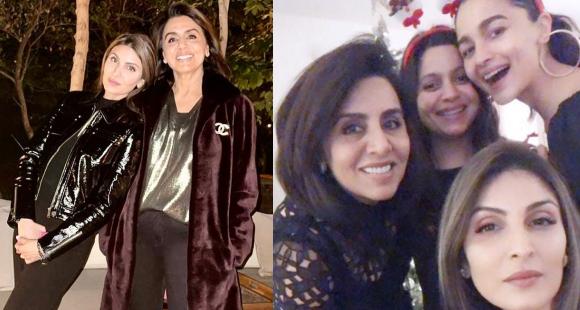 As Alia Bhatt has been diagnosed with coronavirus, her beau Ranbir Kapoor’s sister Riddhima Kapoor Sahni took to social media to share a throwback picture with the actress.

Alia Bhatt, who was creating a lot of buzz with her interesting line of work of late, made the headlines for an unfortunate reason as she has been infected with coronavirus. Yes! Alia Bhatt has been tested positive for COVID 19 and the Humpty Sharma Ki Dulhania actress confirmed the news on social media wherein she revealed that she is in home quarantine at the moment and taking all the necessary precautions along with urging people to take care during the pandemic.

And while, Alia’s fans are quite concerned about her well being, Ranbir Kapoor’s sister Riddhima Kapoor Sahni chose to shower some love on the actress. The lady took to her Instagram story and shared a throwback picture with the Student of The Year star. In the pic, Riddhima was seen posing with Alia, Neetu Kapoor and Shaheen Bhatt and all the ladies were dressed in black. To note, this pic was clicked during Alia’s Christmas celebrations with beau Ranbir and his family. Riddhima captioned the image as, “#throwback” along with heart emoticons.

Meanwhile, Alia has some interesting movies in the pipepline. The actress was recently shooting for Sanjay Leela Bhansali’s Gangubai Kathiawadi, she will be seen in SS Rajamouli directorial RRR which is slated to release in October this year. This isn’t all. Alia will also be seen sharing the screen space with beau Ranbir in Ayan Mukerji’s Brahmastra and has been roped in for Karan Johar’s multi-starrer period drama Takht.