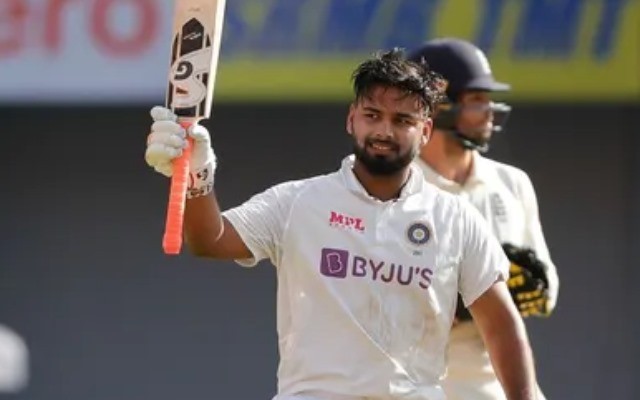 Virender Sehwag believes Rishabh Pant could be India’s ‘next big superstar’ in reckoning if he learns how to bat for a full quota of 50 overs in the limited-overs format.

Rishabh Pant showcased his talent with the bat in the ODIs against England, scoring 77 runs in 40 balls in the 2nd ODI, and then adding unbeaten 78 runs in 62 balls in the 3rd ODI.

His contributions with the bat helped India win the T20I series 3-2 and ODI series 2-1, and Virender Sehwag feels he is the biggest positive that has come out of the series for India. On top of that, the former India dashing opener, who was known for his explosive batting style, added that Rishabh Pant reminds him of his early days.

“The biggest positive that has come out of the series is Rishabh Pant,” Sehwag said on Cricbuzz. “Because when he comes to bat in the middle overs in the ODIs, and the 2nd powerplay comes up, he uses it perfectly,” he added.

“I feel it is important for him to stay in this team, he has quite a positive mindset. He reminds me of my early days. He doesn’t think much what others are saying, he just goes out to bat,” Sehwag said.

Former Pakistan captain Inzamam-ul-Haq lavished praise on Rishabh Pant, saying the wicketkeeper-batsman was the difference between India and England in the recently-concluded One-Day International series between the two teams. Former England batsman Ian Bell can’t imagine an Indian side without Rishabh Pant in it and calls the swashbuckling wicketkeeper-batsman a rare talent, who played with a lot of maturity against England.

Virender Sehwag: If Rishabh Pant Learns To Bat For Full 50 Overs And Converts Starts To 100s He Could Be The Next Superstar

But Virender Sehwag feels that Rishabh Pant needs to learn how to convert the 70s and 80s into big hundreds, and to bat till the end of the innings.

“But only if he learns how to bat for full 50 overs, and bats till the end, and learns to convert 70s-80s into 100s, he could be the next superstar for India. The wicket was very good, the ground was short. Sometimes, you will get slow wickets, and you will not be able to hit your shots. How he gets out of those situations is very important to know, so he must know that,” Virender Sehwag added.

“In the IPL, when he was not able to score runs, he must have changed something which was why he was able to score runs in Tests. But in ODIs, and in T20Is, if he learns to bat till the end, and make the most of my abilities, then he can be the next superstar in white-ball cricket,” he signed off.

Rishabh Pant hit a superb 78* off 62 in the third and final ODI in Pune on Sunday to help India beat England by seven runs and win the series 2-1. He had also hit a blazing fifty(77) in the previous game, albeit in a lost cause.

Rishabh Pant’s sparkling knock of 78 off 62 balls was well supported by Hardik Pandya (64 off 44 balls) but India lost their last four wickets for a mere eight runs to finish at least 30 runs short on another batting belter. Rishabh Pant, during his career-best knock, plundered four maximums and five boundaries, while Hardik Pandya had hit five fours and four sixes during their 99-run stand for the fifth wicket.