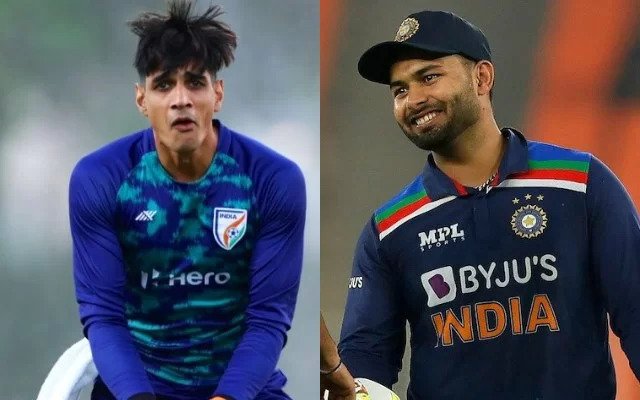 Indian wicketkeeper-batsman Rishabh Pant is fresh off from a series win against England. He was in top form with the bat and the gloves in the series and has kept his A-game on Twitter as well. Pant scored 155 runs in just two games hitting eight fours and as many as 11 sixes in the two games. He scored those runs at a strike rate of over 150.  Pant slammed a brilliant 78 off just 62 balls to help India post a total of 329 runs on the board in the series-decider which the hosts won by 7 runs. Meanwhile, after the game, his response on Twitter to Indian goalkeeper Gurpreet Singh Sandhu’s question went viral.

Gurpreet Sandhu posted a tweet and tagged Rishabh Pant in it posing a question. The goalkeeper posted a picture of himself waiting for the ball to come his way. In the picture, it could be seen that Sandhu’s hair was out of shape and badly messed up. He questioned Pant if the same happens when he is behind the stumps as well.

“Bhai @RishabhPant17 does your hair also go crazy like this when you are behind the wickets and you see the ball coming?”, Gurpreet Singh Sandhu asked Pant on Twitter.

Bhai @RishabhPant17 does your hair also go crazy like this when you are behind the wickets and you see the ball coming? pic.twitter.com/7D2QiYjYrR

Rishabh Pant came up with a unique and witty response to this question from Sandhu which went viral on social media instantly.

“Bhai @GurpreetGK that’s why I wear a helmet or cap while keeping, With cameras around everywhere, never underestimate the use of a good hair gel or wax before hitting the field!”

Bhai @GurpreetGK that’s why I wear a helmets or cap while keeping 😉
With cameras around everywhere, never underestimate the use of a good hair gel or wax before hitting the field ! 😎😜

He emphasised on the importance of wearing a helmet to avoid getting got in the camera on bad-hair days. Sandhu replied to Pant’s response saying ‘advice noted.’

Meanwhile, Pant’s captivating style of batting in the series has impressed one and all but none more than former England skipper Michael Vaughan. He called him a freak and said that he would not advice youngsters to follow Pant’s style of play.

“I will be honest with you. I think he is just a freak. He just does things his way. I would not suggest many to try and play the way Rishabh Pant does, because he is so unique,” Vaughan said on Cricbuzz.