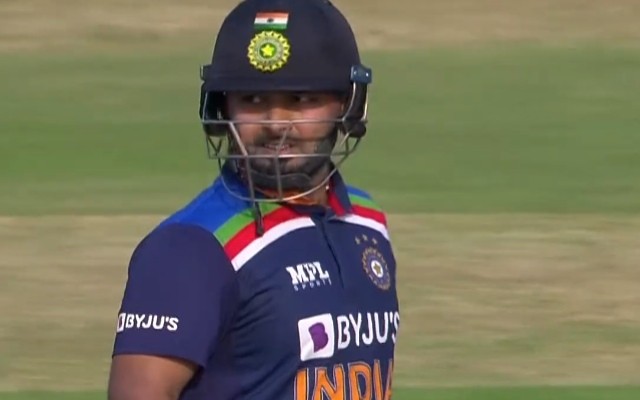 Former Pakistan skipper Inzamam-ul-Haq made a bold claim about wicketkeeper-batsman Rishabh Pant after his fireworks in the 2nd ODI against 2019 World Cup winners England. Inzamam-ul-Haq feels Rishabh Pant can leave MS Dhoni and Adam Gilchrist behind if he keeps going ahead in a similar fashion.

Ever since Rishabh Pant stepped into international cricket, his comparisons with legendary former keepers MS Dhoni and Adam Gilchrist have been doing the rounds. Known for their attacking games, reflexes, and fast hands behind the stumps, the duo is easily regarded as the finest wicketkeepers to have ever played the gentlemen’s game.

Inzamam-ul-Haq: Rishabh Pant Gave India The Boost In Batting In The Lower Order

While Rishabh Pant has a long long way to go in order to improve as a keeper, his form with the bat has been exemplary ever since his return to the national side during the Australia tour in 2020/21.

The left-hander scored a blistering 77 off 40 balls to take India to a daunting 336/6 in the second and penultimate ODI versus England on Friday (March 26) in Pune. It was his swashbuckling innings that provided the much-needed impetus in the end overs, after a sublime ton from KL Rahul and captain Virat Kohli’s fifty.

Impressed with his power-hitting and range of shots, former Pakistan captain and chief selector Inzamam-ul-Haq made a bold claim on the 23-year-old Rishabh Pant.

“The one who gave India the boost in batting in the lower order was Rishabh Pant, who scored a brilliant 77 off 40 balls. Because of him, India’s run-rate spiked. I have been following him for the last 6-7 months, and the way he is batting and scoring effectively at different positions is amazing,” Inzamam-ul-Haq said on his YouTube channel.

He further opined, “The way he expresses himself and the range of strokes he has, I have seen it only in two wicketkeeper batsmen in the last 30-35 years, MS Dhoni and Adam Gilchrist. These were the two wicket-keepers who could change a match. The kind of performance Rishabh Pant is giving, if he continues to play in the same manner, he will leave both of them behind, and by quite some distance.”

“It’s not that KL Rahul batted slowly. His inning was magnificent, but the one that changed the match was Pant’s 40-ball 77 and Pandya’s 35 off 16. How they scored in 9 and a half overs made a difference,” the former batsman Inzamam-ul-Haq added.

Despite fireworks from Rishabh Pant, KL Rahul, and even Hardik Pandya’s 35 off 16 balls, India posted 336-6 in the second ODI only to lose the clash to England by 6 wickets, with more than six overs to play. The visitors’ run-chase was led by Jonny Bairstow (124) and attacking half-centuries from Jason Roy and Ben Stokes (99).

Rishabh Pant will like to keep the momentum going and go bonkers once again in the third and final ODI between India and England, in Pune, on Sunday (March 28). Rishabh Pant didn’t feature in 1st ODI but Shreyas Iyer’s shoulder injury meant he featured in 2nd ODI.

In Tests, Rishabh Pant is in sublime form. Rishabh Pant’s 97 nearly turned the Sydney Test in India’s favour which India managed to draw while his 89 not out at Brisbane won them the series Down Under. Then he hit a hundred under pressure against England in Ahmedabad to clinch India’s spot in the World Test Championship final.