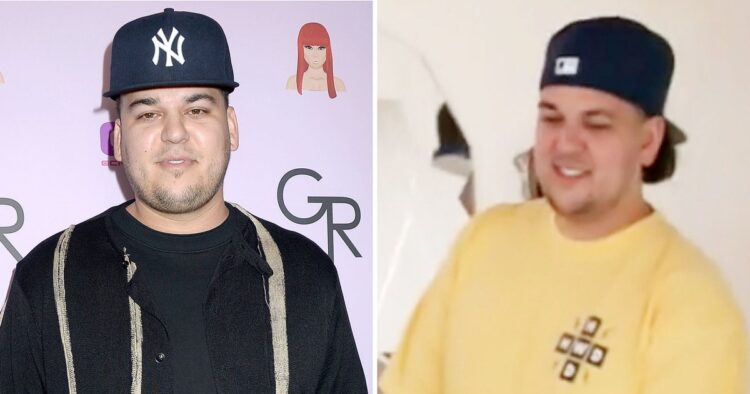 We see you, Rob Kardashian! The E! reality star showed off his impressive weight loss transformation while making a rare appearance on the Thursday, April 1, episode of Keeping Up With the Kardashians.

Rob, 34, looked more confident than ever in a scene with mom Kris Jenner, her boyfriend Corey Gamble, younger sister Kylie Jenner and her daughter, Stormi Webster. Kris, 65, and Corey, 40, were preparing to meet with a Tai Chi instructor.

Kris previously gushed over his progress in a November 2020 interview with iHeartRadio’s “Pretty Messed Up” podcast, proudly telling them he was doing “so good.”

The momager also praised Rob for being a stand-up parent to his 4-year-old daughter, Dream Kardashian. “He’s so in love with that kid,” Kris shared. “He’s such a great dad and you never know — you have kids, they grow up, they have their kids — and you just don’t know how somebody is going to be as a parent but he’s just … wow,” she added. “He really is amazing.”

Rob wowed fans when he debuted his slimmer figure at Khloé Kardashian’s birthday party in June 2020. After the swanky shindig, the Good American founder shared how proud she is of her sibling now that he was “feeling himself.”

The Arthur George founder has been putting in the work to shed some pounds, eating nutritiously while also incorporating new exercise routines. Rob first started opening up about his fitness journey back in June 2019. “Day 1 all good,” he captioned a photo of the gym at the time.

Rob used to “want to stay out of the limelight, but his mom and sisters, especially Kim, fully support[ed] his progress,” a source previously told In Touch in October 2019. “It’s [been] an uphill battle, but Rob is determined to show all the haters that he’s not down for the count,” added the insider. “He promises that he’ll be back in front of the cameras, but only when he’s good and ready.”

Keeping Up With the Kardashians is coming to an end after season 20, so it’s an extra special treat to see Rob living his best life before the finale!