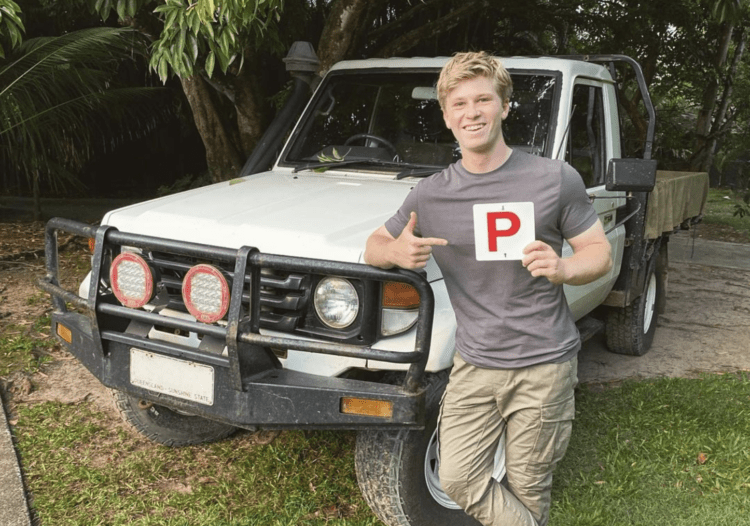 Robert Irwin has passed his driver’s test — and took his first solo spin in his late dad, Steve “The Crocodile Hunter” Irwin’s truck.

The Crikey! It’s the Irwins star, 17, proudly posed with his red on white “P plate,” which provisional drivers in Australia must display for their first few years of driving, after successfully completing the exam. In the social media photo, he leaned against his dad’s “ute,” which is a utility vehicle with a tonneau, or cargo area, in the back.

“Passed my driving test!” Robert wrote on social media. “My first solo drive was a super special one — took my dad’s old Ute to see Grace in the hospital right after she was born.”

Grace is his sister Bindi’s first child with Chandler Powell. The baby was born on March 25, and her middle names, “Warrior Irwin,” are a tribute to the late Steve’s legacy as a “wildlife warrior,” the proud mom revealed.

Robert shared photo of himself, looking like his dad, holding baby Grace when she was born. He said he was looking forward to “uncle adventures.”

Learning to drive in Steve’s old car is a tradition for the close-knit family, who run (and reside at) the Australia Zoo in Queensland. Bindi took her road test in the car in 2016.

Robert — a wildlife photographer, who works closely with the Australia Zoo crocodiles, like his dad — first shared that he was learning to drive in the car in 2019. At the time, his mom, Terri Irwin, said the over 30-year-old vehicle was a “beast” to learn on because it was manual and didn’t have automatic steering. However, “Once you’ve mastered that, I think you can drive anything,” she said.

Steve would be seen driving the vehicle in his wildlife documentaries. When he died in 2006, after being pierced in the chest by a stingray, the truck was incorporated into his memorial service at the Australia Zoo. Singer John Williamson performed atop the ute. The service ended when the director of the zoo loading Steve’s truck with a surfboard, bedroll and some other of his personal belongings and drove it out of the Crocoseum past a guard of honor formed by the zoo’s khaki-clad staff.