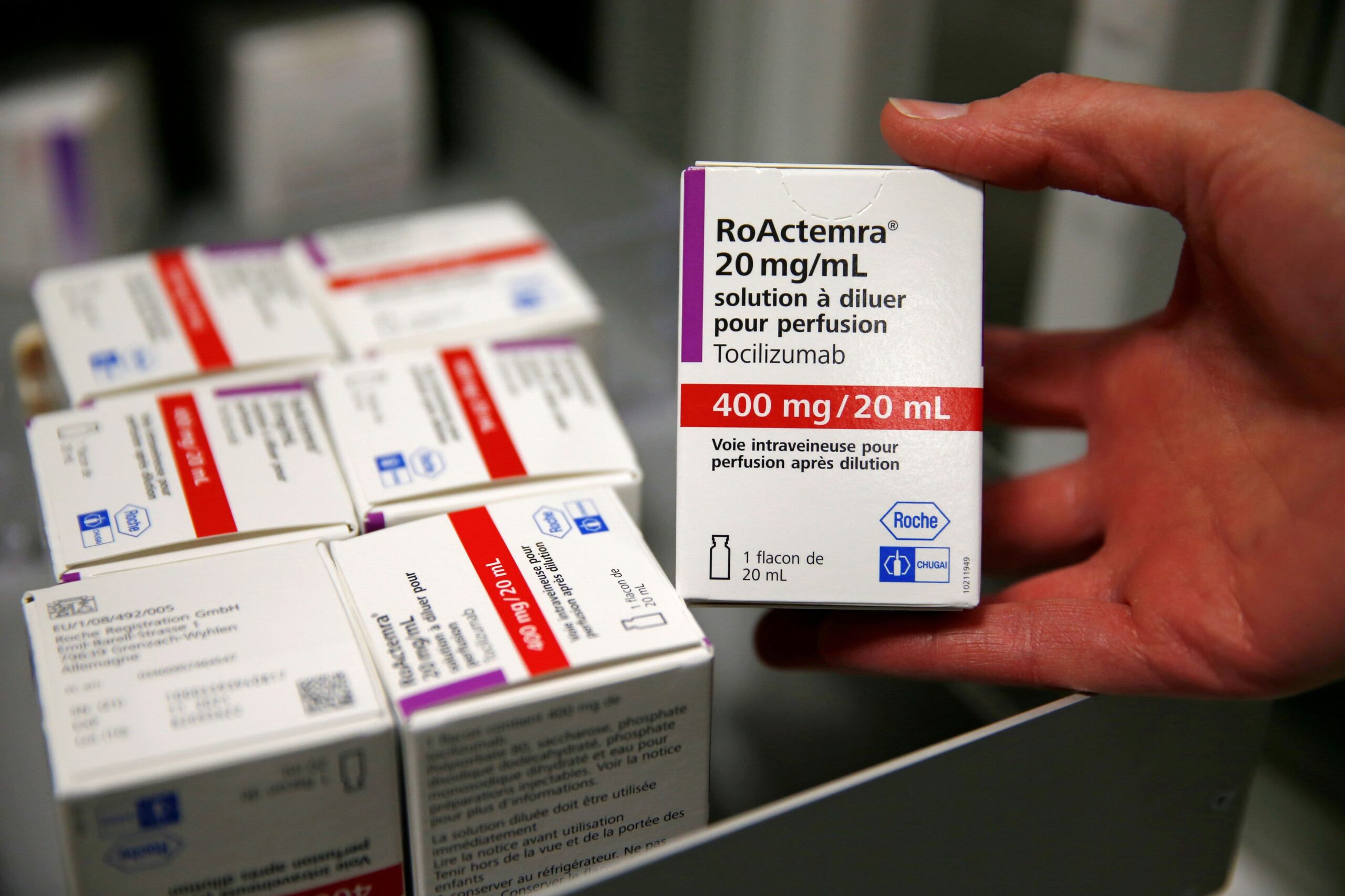 A pharmacist displays a box of tocilizumab, which is used in the treatment of rheumatoid arthritis, at the pharmacy of Cambrai hospital, France, April 28, 2020.

A drug used to treat people with rheumatoid arthritis appears to reduce the risk of death in hospitalized patients with severe Covid-19, especially when it was combined with the steroid dexamethasone, researchers at the University of Oxford said Thursday.

Oxford researchers also found tocilizumab, an intravenous drug manufactured by a division of Swiss drugmaker Roche, also shortened patients’ length of stay at hospitals and reduced the need for a ventilator. The study was part of the RECOVERY trial, which has been testing a range of potential treatments for Covid-19 since March.

“Previous trials of tocilizumab had shown mixed results, and it was unclear which patients might benefit from the treatment,” Peter Horby, a professor at the University of Oxford and joint chief investigator for RECOVERY, said in a statement. “We now know that the benefits of tocilizumab extend to all COVID patients with low oxygen levels and significant inflammation.”

A total of 2,022 patients were randomly selected to receive tocilizumab, which is marketed under the brand name Actemra, by intravenous infusion and were compared with 2,094 patients randomly selected to receive standard care alone. The researchers said 82% of the patients were also taking a steroid such as dexamethasone, another drug that has been found to reduce deaths in the sickest Covid-19 patients.

The drug increased the probability of discharge within 28 days from 47% to 54%, according to the researchers. The benefits were seen in all patients, including those requiring mechanical ventilators in an intensive care unit, they added. Among patients not on a ventilator before entering the trial, tocilizumab reduced the chance of progressing to invasive mechanical ventilation or death from 38% to 33%, the researchers said.

The researchers said using tocilizumab in combination with dexamethasone appears to reduce mortality by about one third for patients requiring oxygen and nearly one half for those requiring a ventilator.

Results from the Oxford study have not yet been published in a peer-reviewed journal.

Public health officials and infectious disease experts say world leaders will need an array of drugs and vaccines to end the pandemic, which has infected more than 107.4 million people and killed at least 2.3 million in a little over a year, according to data compiled by Johns Hopkins University.

In the U.S., the Food and Drug Administration has approved Gilead Sciences’ antiviral drug remdesivir as a treatment for for Covid-19 patients at least 12 years old and requiring hospitalization.

The FDA has authorized the use of two monoclonal antibody treatments as well as two vaccines – from Pfizer and Moderna. A third vaccine, from Johnson & Johnson, is expected to be authorized by the FDA as early as this month.