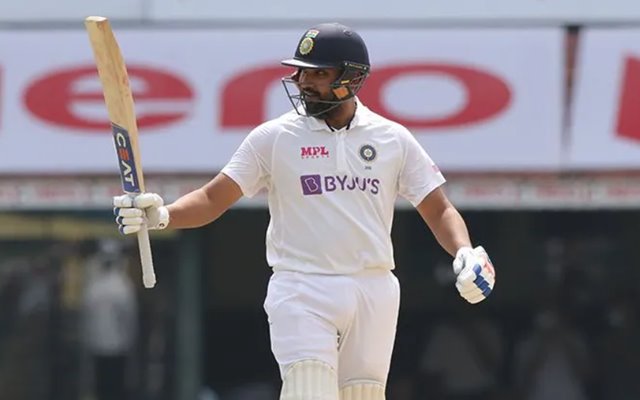 Alastair Cook, former England opener said Indian opener Rohit Sharma is not in the same tier of aggressive Test openers as former Indian swashbuckling opener Virender Sehwag but the Mumbai batsman has the ability to take the game away from oppositions single-handed consistently in the longest format of the game as well like in limited-overs where he has 3 ODI double tons.

Former England opener Alastair Cook has backed Rohit Sharma to have a long run as a Test opener, saying fans and critics love the manner in which he goes about his knocks whenever he gets settled into his innings.

Alastair Cook: Rohit Sharma Is In The Next Tier Of Aggressive Batsmen After Virender Sehwag

His comments came after the hitman dominated the England bowling attack on the first day of the 2nd Test on a spin-friendly pitch in Chennai. He looked a class apart from the rest batsmen as he played the English spinners Moeen Ali and Jack Leach with ease on a pitch where some of his established teammates like Virat Kohli and Cheteshwar Pujara struggled.

It was difficult to survive on the Chepauk pitch as the pitch was offering turn but Rohit Sharma succeeded by batting aggressively as he scored 161 at a strike rate of close to 70. He hit 18 boundaries and 2 sixes as he was sweeping and driving against spin with ease.

Rohit Sharma’s 7th Test hundred helped India end Day 1 at 300 for 6, seizing the initiative days after losing the first Test by a mammoth 227-run margin. He and Ajinkya Rahane stitched a 162-run stand as they kept the scoreboard moving to help India recover from the quick wickets of Cheteshwar Pujara and Virat Kohli before Lunch.

“He is a little bit more attacking than I was. He is not quite Sehwag in terms of that kind of attack he (Sehwag) is probably is one of the most attacking and successful opening batsmen. Rohit is probably in the next tier of aggressiveness but he looked so controlled. In that innings, he wanted to attack when he wanted, everything looked quite controlled.

“The only obvious issue with Rohit is that line outside the off-stump, the way he got out in the first innings of the 1st Test match. His record away from home isn’t great. That’s where you need to target him but obviously, this pitch doesn’t have that pace,” Alastair Cook told BBC’s Test Match Special Podcast.

“In these conditions, he looked absolutely world-class. His stats in India averaging over 50 shows that.”

Alastair Cook likened Rohit Sharma’s style of batting in Tests to that of Virender Sehwag while pointing out that the former is probably not in the same tier when it comes to attacking nature but can do damage.

Alastair Cook: Rohit Sharma Has Only Just Started Opening And Is Here To Stay For A While

Alaister Cook also noted that Rohit Sharma struggled for consistency initially in his Test career but that he has transformed into a fine batsman after starting to open the innings in the longest format for India as late as 2019.

“… Also, when he has played, he wasn’t that consistent to start with. Also, the Indian selectors make changes if he was English, maybe he would have been given a longer run,” Alastair Cook added.

“He has only just started opening. He has batted a lot in the middle order. Only in the last little bit he has taken his one-day opening role, he has obviously opened a lot in one-day, into the red-ball (format).”

“He is here to stay for a while. They like having him in the squad and he is in the team for that all-round package — Clearly his runs and the manner he gets his runs, if he gets in, he is going to do what he has done today (more often).”

Rohit Sharma has scored 864 runs as an opener in 13 innings averaging 66.46 and has 4 tons including his career-best score of 212. India has grabbed the initiative by restricting England to 39/4 on the 2nd day before Lunch after scoring 329.