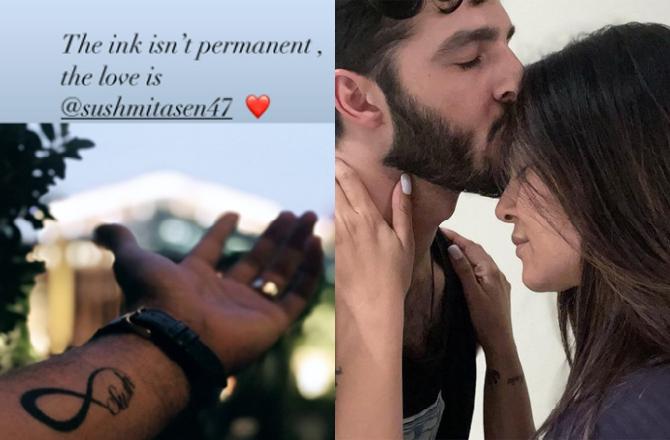 Sushmita Sen and Rohman Shawl have never shied away from talking about their relationship and how much they are in love. The duo has often shared pictures and videos where we can see their romance and chemistry. And now, it seems the love has gone to the next step as Rohman has got the actress’ name tattooed on his hand.

He shared a picture of the same on his Instagram story and wrote- The ink isn’t permanent, the love is. Have a look at it right here:

In an interview earlier this year, talking about her, Rohman said, “Okay, I will just sort this out for once. She is the best, she beats me every time and I am a very good boyfriend. She’s really good… I have taught her, but she beats me all the time.” And what followed next was a collective laugher.

She added, “That’s true, he taught me chess, and I beat him also.” Rohman continued and stated, “No, she is not an overachiever. She is someone who learned chess and she told him you will defeat me a hundred times and then, you will find it difficult to win once in a hundred times and I have done that.”

And in another interaction, Sen spoke about her beau and this is what she had to say, “Initially, he kept hiding his age for some reason. I would keep asking him, ‘So, how old are you? You look so young.’ And he would be like, ‘You guess!’ Later, once I realised how young he was, as to why he didn’t want that to get in the way of this conversation. So yeah, we did not really choose this, it was chosen for us. It was destined,” she said.

The Main Hoon Na actress also narrated how she met Rohman on Instagram while she accidentally found him in her DMs. She said, “I don’t check my DMs, I never opened direct messages. I was shouting at somebody in the house because they had just broken a glass and I had a touch screen phone in front of me and I was just scrolling direct messages and I don’t know while saying something, I accidentally pressed and opened this message. And there is a gentleman there playing the guitar and saying the loveliest things and I am thinking, ‘Who is he?'”

Also Read: Sushmita Sen: I Am A Proud 45