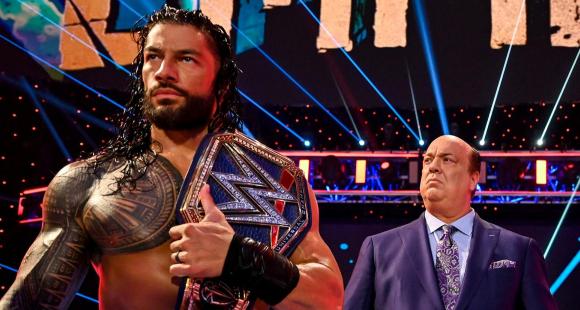 In a recent interview, Roman Reigns was all guns blazing as his response to WWE legends like The Undertaker and Goldberg who claimed the current WWE product was “soft.”

Roman Reigns on Undertaker’s WWE being ‘soft’ remark: It was just like a retired guy trying to sound gangster

Roman Reigns was no filters attached during his recent appearance on Sports Illustrated Media Podcast with Jimmy Traina via Wrestling Inc. as he was asked about his reaction to The Undertaker”s controversial remark of the current WWE product being “soft,” which even Goldberg agreed upon. According to the Universal Champion, the current roster is doing the same job and it’s not like the bumps have gotten any worse or better.

Back then, a dropkick would be the finishing move while in the current era, it’s like the second move during a wrestling match as they’re experimenting a lot more. Reigns believes that the active WWE roster is a “lot more physical” and as the WWE Universe has been seen so much more, the wrestlers have to do a little more in order to pique their interest and show them something different. When it comes to a “false finish” which is a pin people believe to be the final move in a match, the current roster goes through it like Ricky Steamboat – Randy Savage and the fans will get to see like 15 false finishes on SmackDown.

Roman added, “It’s strange. I really feel like he misspoke. Because Mark is a really good guy. He’s very knowledgable. Obviously, he has a ton of respect for the business. Goldberg is just Goldberg. Who cares?” The 35-year-old wrestler also quipped about Taker’s ‘guns and knives in the locker room’ comment asking if TSA just let that happen. He also defended the whole current roster ‘playing video games in the locker room’ remark stating how he doesn’t do it at work and that some of his WWE characteristics are actually inspired by it. Giving The New Day as an example, Reigns stated that they’re uberly talented and can get away with playing video games.

“I’d rather my guys be playing video games than breaking into a bag of some sort,” Roman stated before adding that it’s a different time now with the current WWE roster being “smarter”. Taking note of the financial side, Reigns thinks that this era’s wrestlers will be careful when it comes to saving money, preparing for the future, having a life after WWE when they can’t fall down anymore to their actual health.

“I think it was just like a retired guy trying to sound gangster,” Roman concluded about Taker’s views.

Do you agree with Roman Reigns’ reaction to The Undertaker’s current WWE product being “soft” remark? Share your honest thoughts with Pinkvilla in the comments section below.

Roman Reigns on Undertaker's WWE being 'soft' remark: It was just like a retired guy trying to sound gangster