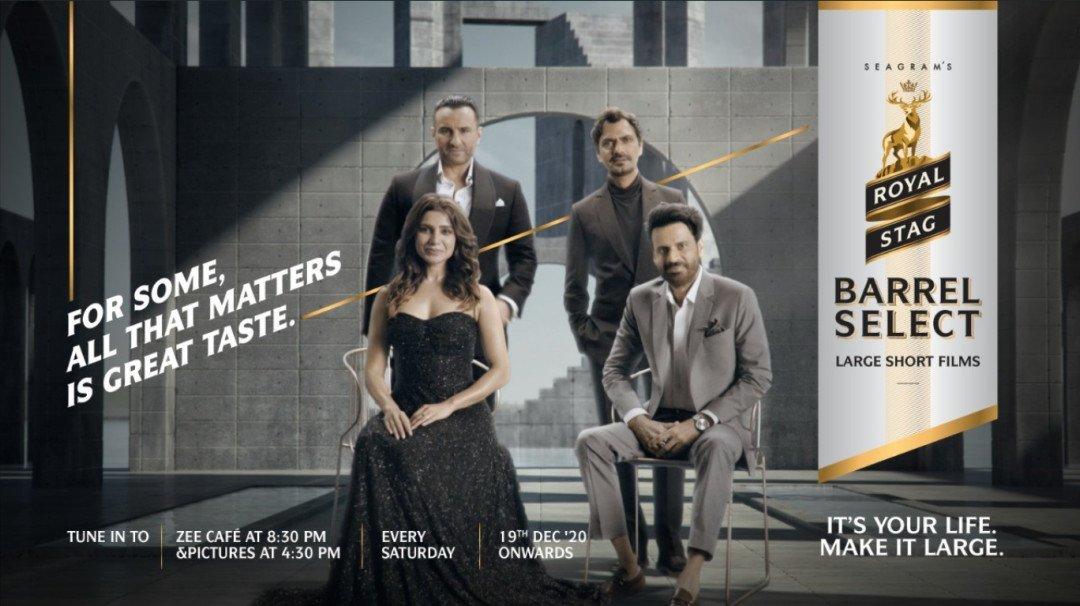 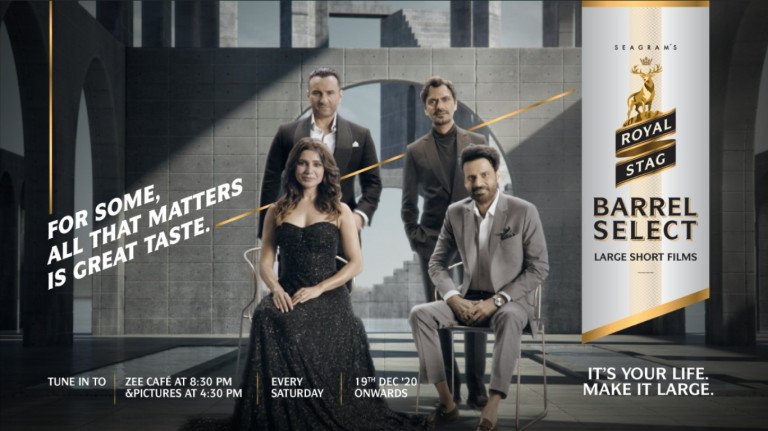 Cleverly tailored narratives retold through the lens of avid film-makers bring to you unexpected joys this December. Royal Stag Barrel Select Large Short Films recently hosted some of the greatest minds from the world of films for an engaging conversation on the evolving world of cinema. This association which has been developed by Wavemaker India for Royal Stag Barrel Select Large Short Films brings to you a line-up of untold masterpieces, beautifully depicted in a unique format and fashion.

Moderating this interesting segment, Mandira Bedi sets the right tone bringing together celebrated actors like Saif Ali Khan, Nawazuddin Siddiqui, Manoj Bajpayee, Samantha Akkineni, Sayani Gupta, Divya Dutta, Shweta Basu Prasad, Tisca Chopra, Niranjan Iyengar and many more to share their school of thought on progressive cinema through the ages. The panellist of actors had much to discuss on how Indian cinema has come a long way in stretching its arm further into a global pool of artists and imbibing foreign film culture. The property will also air on the same day at 11 PM on &Pictures and stream on ZEE5.

Original short films By India’s finest Directors as well as films made by young, aspiring directors make Royal Stag Barrel Select Large Short Films, the most celebrated and credible short films platform in the country. and most recognised for showcasing such mesmerising stories. The platform has collaborated with successful storytellers from the world of cinema who truly stand for originality and excellence. It has created an ecosystem and with a slew of powerful films and is the perfect stage that provides a canvas for directors and actors to tell compelling stories within 15-20 minutes.

Speaking about the series, Ashish Sehgal, Chief Growth Officer, ZEEL, said, “Royal Stag Barrel Select Large Short Films has been an evolving chapter in a demanding space for impactful storytelling. It’s a belief beyond wonders to see what can be accomplished in just 15-20 minutes of screen space. Over the years, our discerning viewers on Zee Café have truly appreciated the nuanced storytelling and the stirring discussion by acclaimed artists from Indian cinema. With this being the third year of our association with Pernod Ricard India, we are delighted to offer talented filmmakers a wider reach with Zee Café and &Pictures along with ZEE5. Given its unique and enriching format, the property delivers immense value to even our brand partners who see it as an innovative platform to engage with an enthused audience. With a promising line-up this year, we are certain that the inspiring debate on cinema will truly enthral our audiences across ZEE.”

Commenting on the occasion, Kartik Mohindra, Chief Marketing Officer, Pernod Ricard India, said, “Royal Stag Barrel Select Large Short Films has revolutionized the short film format in India and has redefined the movie-watching experience. The testament to its wide popularity and success is the overwhelming response to each of our releases as well as industry recognition awarded to our ground-breaking and category-defining films. We are delighted to leverage the power of this platform and associate with incredible storytellers, who, like the brand, personify the spirit of pursuit of excellence. As the short film genre grows, our endeavour is to bring these powerful stories and their creators to the forefront for the most diverse entertainment experience for our consumers.”

Karthik Nagarajan, Chief Content Officer for Wavemaker, said, “What simply began as an experimental design has culminated into a world of desirable content which now plays a bigger part on a global scale. It has been an absolute pleasure working with Zee in conceptualizing and amplifying the shared endeavour and we look forward to scaling new heights this year with the exciting new line-up of offerings. The Royal Stag Barrel Select Large Short Films has produced some of the finest quality films building on the notion that there is always a growing space to inculcate newer practices sending the right message to a younger generation of budding filmmakers. We at Wavemaker and GroupM are delighted to continue our long-standing partnership and we are certain to scale newer heights this year with a promising line-up of compelling short features.”