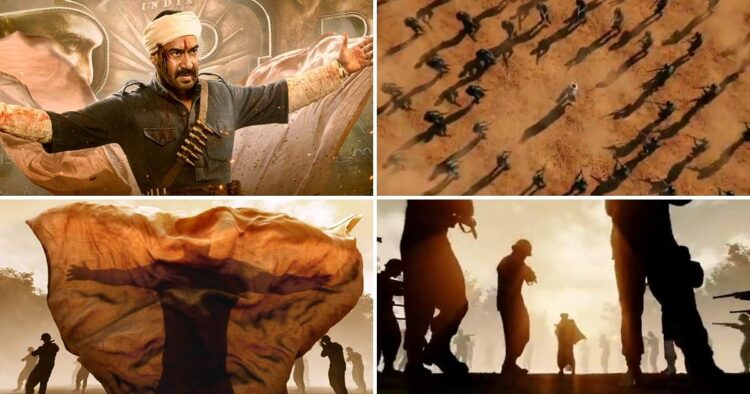 Ever since the announcement of Ajay Devgn’s cameo in SS Rajamouli‘s Pan-India film RRR, his fans have been waiting with a bated breath to witness what the makers have in store for them. It’s his birthday today and there can’t be a better day to release his glimpse from the film.

Following the similar pattern of mixing character teasers with their motion posters, makers released a just little over a minute video unveiling Ajay’s look from the film. It’s more than a glimpse because we can hear his character chanting while he’s surrounded by a rival gang.

In a very battle-of-basta*ds-que way, the promo starts with Ajay Devgn’s character standing heroically alone amid a whole team of enemies. It ends as he reveals his face by stripping the ‘shawl’ he’s donning.

This much-awaited magnum-opus RRR is all set to hit the theatres this year, on 13th October, all across the nation. Before the release, the North India theatrical rights, electronic, satellite and digital rights of RRR have been sold to the leading Bollywood studio Pen India Ltd.

RRR is being touted as one of the biggest films of 2021 as this is SS Rajamouli’s next after the grand ‘Baahubali’ series. The fictionalised tale will showcase Ram Charan and Jr. NTR in the iconic roles of Alluri Sitarama Raju and Komaram Bheem respectively, showcasing the journey of before they became legend.

The film’s recent announcements and poster looks have received weaves of love and appreciation from the audience. It is counted as one of the most awaited films of the year, which will bring up the Indian cinema back to its feet after the pandemic hit.

Talking about the collaboration, D.V.V. Danayya recently shared, “It’s a pleasure to associate with Pen India Ltd. in our vision to take this film to the audience nationally. We are confident that the film will break all barriers of language and region. This will be entertainment at its pinnacle.”

Boasting of an ensemble cast of Ram Charan and NTR Jr in the leading roles along with Ajay Devgn, Alia Bhatt, ‘RRR’ is helmed by the legendary SS Rajamouli. The film will also mark the director’s follow-up after the ‘Baahubali’ series.

Must Read: From Disha Patani, Ananya Panday To Katrina Kaif – Set The Mood Right For Your Big Date Night With Satin Dresses Inspired From These B’wood Beauties