Home EntertainmentBollywood RRR Vs Maidaan: Boney Kapoor Calls Out SS Rajamouli, Says, “When I Reached Out To Rajamouli…”

RRR Vs Maidaan: Boney Kapoor Calls Out SS Rajamouli, Says, “When I Reached Out To Rajamouli…” 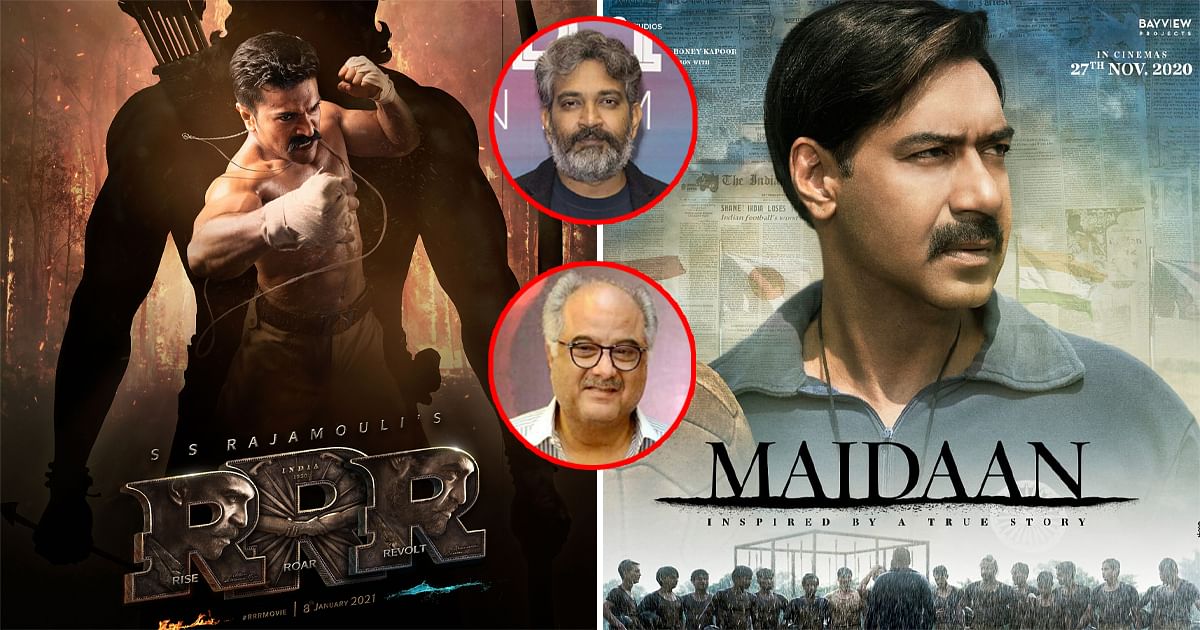 It’s a known fact that Ajay Devgn’s upcoming film Maidaan produced by Boney Kapoor was scheduled for Oct 15 release. But then SS Rajamouli also announced his much-awaited biggie RRR for an Oct 13 release. This is a huge clash and the clashes are not a new concept in Bollywood. But this one particularly has been criticised by industry because Ajay Devgn is a part of both films. And moreover, going by the kind of losses filmmakers have faced during the pandemic, a clash like this doesn’t make any sense.

Boney Kapoor who had booked the release period before for Maidaan has been quite vocal about it. Now he has again talked about the same and has slammed SS Rajamouli for ‘bullying’. The producer has also called the clash an unethical one.

During an interview with Forbes, “The clash between RRR and Maidaan is very unfortunate and at the same time it is unethical.” Boney Kapoor said that the film got postponed due to pandemic but they were first to take the release period of Dussehra which is necessary for a film of big-budget like Maidaan. However, he said that it came as a rude shock to him when Rajamouli also announced RRR for release in the same period. “Rajamouli announced RRR on the same date, despite the fact that our main lead of Maidaan, Ajay Devgn, is also starring in RRR.” he added.

Further explaining that even Ajay Devgn wasn’t informed about the same, Boney Kapoor said, “In my whole experience till date, I am not aware of anywhere in the world where two films featuring the same star are announced for release on the same day. There was no discussion on this from the makers of RRR. Nor was Devgn informed at the right time of this decision that they took. When I reached out to Rajamouli he said that the producers had taken this call and not him, which I refuse to believe. I think the entire industry comes across as fractured due to this action by Rajamouli. It shows that we are not ready to stand with each other and work as an organised industry. And that too coming from someone as senior and as successful as Rajamouli was never expected.”

Back in the time when Baahubali was being made, SS Rajamouli had offered the film to Late Sridevi who was the wife of Boney Kapoor. However, due to some reasons, the actress couldn’t do it. Boney said, “There may have been some misunderstandings regarding Sridevi not starring in Baahubali when Rajamouli had offered her that role but I can also confirm that most of the reasons that Rajamouli was given for that by the producers at that time were untrue. I have high regard for Rajamouli as a filmmaker and, frankly, after giving a film as monumental as Baahubali, he doesn’t need a holiday release nor to resort to such strong-arm tactics. This is nothing short of sabotaging and bullying.”

What are your thoughts on this? Let us know in the comments section down below.

Must Read: Kartik Aaryan & Katrina Kaif To Team Up With Shah Rukh Khan For A Project? Deets Inside!