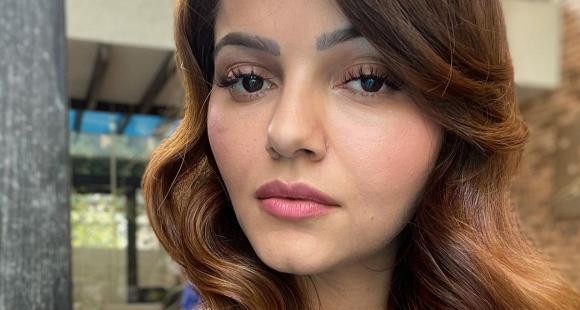 The Bigg Boss 14 winner and actress Rubina Dilaik has confirmed that she will not be seen in Khatron Ke Khiladi 11. She asks her fans to wait for a big surprise.

Rubina Dilaik reveals she will not participate in Khatron Ke Khiladi 11; Drops news of a big surprise

The Bigg Boss 14 winner Rubina Dilaik was rumoured to be a part of the next season of Khatron Ke Khiladi (KKK) along with her actor-husband Abhinav Shukla. The new season of the popular adventure reality show, hosted by Rohit Shetty, is going to be aired soon. While some names for the show are confirmed, there are still others whose entry in the show is skeptical. Rubina was being considered among the confirmed contestants of season 11 of KKK, but she has dismissed the rumours.

The Shakti TV serial fame actress has recently opened up about her upcoming projects. Rubina has said that she is doing the daily soap Shakti: Astitva Ke Ehsaas Ki, and she will give her 1000 percent to the role. Regarding her entry into KKK, she said she might do the show next year if offered to her. The actress has also made her fans excited as she announced news of a big surprise.

Rubina has said that she is re-entering her popular TV show Shakti: Astitva Ke Ehsaas Ki. The actress is making a comeback in the show after a long period, and her fans are glad to see her again on TV screens as their favourite character Soumya.

Rubina Dilaik had entered the reality show Bigg Boss 14 wither her husband and actor Abhinav Shukla. They both were strong contestants of the show, and their bond in the show was appreciated by the audiences. Rubina Dilaik was declared the show”s winner as she walked away with the trophy and the prize money. At present, she is only doing the daily soap and is not part of any other reality show.

Also read- Rubina Dilaik opens up on her return to Shakti: Astitva Ke Ehsaas Ki; Reveals the show is going for a leap

Rubina Dilaik reveals she will not participate in Khatron Ke Khiladi 11; Drops news of a big surprise