Rumblings of discontent at Cong. meet over poll debacle 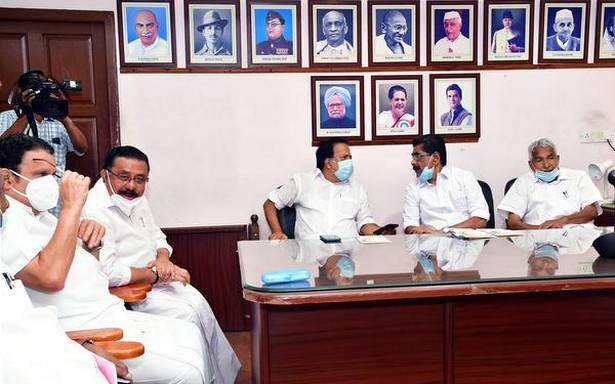 The Political Affairs Committee (PAC) of the Kerala Pradesh Congress Committee (KPCC) met here on Thursday amidst growing rumblings of discontent in the party with its current leadership for the poor showing in the local body elections.

KPCC working president K. Sudhakaran, MP, seemed to spotlight the dissatisfaction when he said that the culture of nominating office-bearers from block-level and upwards had hollowed out the Congress party and weakened its organisational structure.

The Congress had become a loose federation of group satraps committed solely to preserving their clout. It lacked leadership with commanding power, he said.

Mr. Sudhakaran hinted that only a leadership change would help turn the Congress around and transform it into a formidable fighting machine ahead of the Assembly elections.

With Assembly elections around the corner, the national leadership of the Congress did not want its rank and file to indulge in a protracted and essentially self-defeating blame game over the debacle in the polls. Mr. Venugopal’s words seemed to reflect the determination of the AICC to move forward.

By one account, the PAC would debate whether the Congress had given voters an alternative vision of policy and credible governance alternative alongside its anti-corruption election platform.

The PAC would also debate the criticism that the Congress had acted in feverish haste by ousting the Jose K. Mani faction of the Kerala Congress (M) from the United Democratic Front (UDF).

Mr. Mani’s inclusion in the Left Democratic Front (LDF) had brought the ruling front considerable gains in the UDF heartlands in Kottayam, Idukki and Pathanamthitta.

The PAC would weigh the criticism that the Congress had accorded the LDF a political weapon by openly aligning with the Welfare Party of India (WPI), the political arm of the Jamaat-e-Islami. Congress leaders had given mixed messages about the nature of the “alliance” with the WPI.

Some of them felt that the WPI alliance had driven traditional UDF voters, mostly Hindus, into the fold of the Bharatiya Janata Party-led National Democratic Alliance. The PAC would also examine whether the selection of candidates reflected the age, religion and caste demography of constituencies at least in some measure.