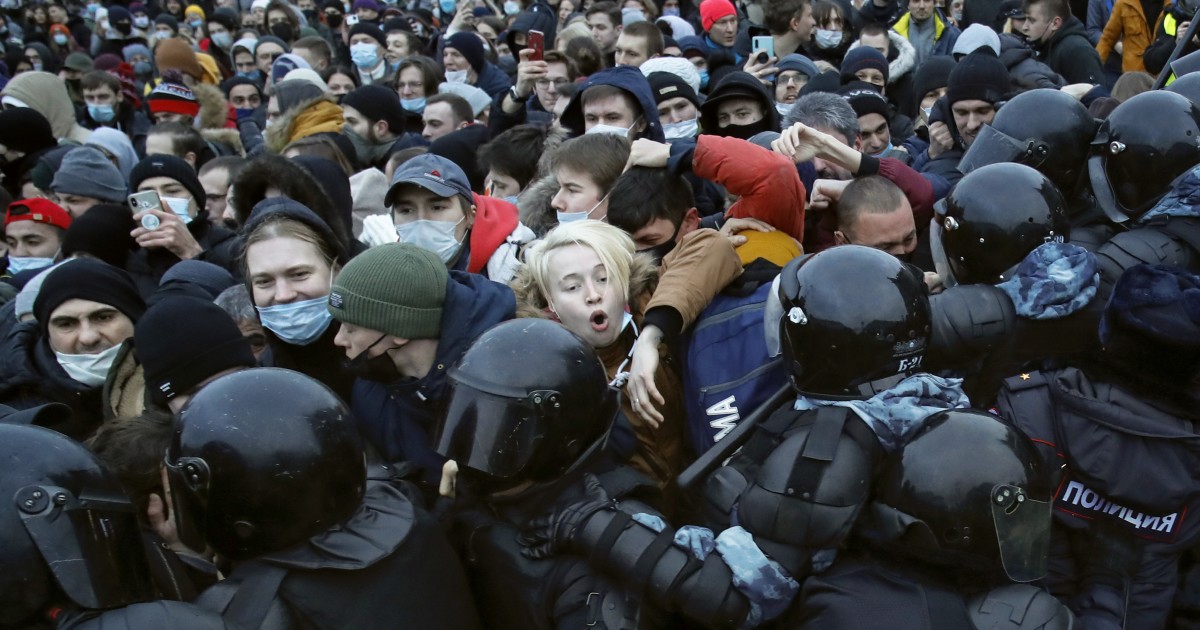 Whether out of superstition, scorn or steadfast denial, Russian President Vladimir Putin famously avoids saying Alexei Navalny’s name out loud. But across the vast country Putin rules, the leading opposition figure is known to practically everyone.

Five months ago, Navalny lay comatose in a Berlin hospital, having narrowly escaped death by poisoning with a military-grade nerve agent. In the face of overwhelming evidence of a Kremlin role, Putin’s government denied any responsibility.

Now the 44-year-old anti-corruption activist is back in Russia, behind bars, and still at the head of an extraordinary opposition movement that could have far-reaching repercussions for Putin’s rule.

President Biden pressed Navalny’s cause this week in his first phone call with Putin since taking office. Tens of thousands of Russians took to the streets Saturday in towns and cities stretching across the country’s 11 time zones, demanding freedom for Navalny, who was arrested Jan. 17 at Moscow’s Sheremetyevo airport upon his return.

More protests are planned for Sunday — a scenario that could set off a major confrontation with authorities. Ratcheting up the pressure, police raided two offices associated with Navalny’s anti-corruption organization and searched his apartment, his aides said Wednesday on social media.

Here is more about the movement Navalny leads, and where it might go from here.

How serious a threat does Navalny’s movement pose to Putin?

The charisma and popularity of this once-obscure blogger, together with his powerful anti-corruption message, present a novel and unorthodox challenge to the Russian leader, analysts say. But Putin has the levers of a vast security system, a pliant bureaucracy and an enormous patronage network at his disposal. The reaction of those around the Russian leader — some of whom have their own competing agendas — will be an important factor to watch, said Heather Conley of the Center for Strategic and International Studies.

“I don’t believe [Putin] is worried, per se, about the number of protests,” said Conley, a former State Department official. “It’s how the various camps in his inner circle are interpreting them, the degree of nervousness.”

Much depends on how the Kremlin handles unrest going forward, and how Navalny is treated, analysts said. The government could pursue one of several pending criminal cases against him, including fraud allegations he and his followers say are baseless and politically motivated. Already, he has been given an initial 30-day detention for parole violation — an accusation critics call particularly ludicrous, because the “violation” occurred when Navalny was whisked out of the country for lifesaving medical treatment.

Putin faces a dilemma: He cannot allow such a challenge to go unanswered, because it would risk diluting his authority. But Navalny’s raw courage in making a voluntary return — because of his stated moral conviction that he should not wage his struggle from exile — raises the prospect of further maltreatment enshrining him as a martyr.

“I’d watch for whether they play it too hard or too soft — if he has a nasty accident, which no one would believe, that would enrage and inflame emotions,” said James Nixey, an analyst at the British think tank Chatham House. “There’s a line to be navigated.”

In some ways, the Navalny narrative reads like the tumultuous chronicles of the famous Soviet-era dissidents — physicist Andrei Sakharov, novelist Alexander Solzhenitsyn, refusenik Natan Sharansky. But his story is very much of the digital age.

Canny use of social media platforms has given Navalny’s movement reach and influence that rival those of Russia’s largely moribund state-controlled media. Days after his latest arrest, Navalny’s team released his boldest and most direct rebuke of Putin: an eye-popping investigative video on YouTube, viewed by tens of millions, alleging that presidential cronies “built a palace for their boss” — an opulent billion-dollar mansion on the Black Sea.

Elsewhere online, Twitter followers of Navalny and his aides had an insider’s-eye view of his harrowing poisoning, as associates documented him stricken and groaning on a flight over Siberia, and his eventual recovery in Berlin, where he posted from his hospital bed. On TikTok, Russian teens now offer up enthusiastic tutorials on how to avoid arrest at pro-Navalny protests.

Navalny also deploys sharp sarcasm — for which Russians have a longstanding cultural appreciation — in his social media posts. In September, after coming out of a medically induced coma and being removed from a ventilator, he used Instagram to deliver a lighthearted ode to the joys of respiration.

“I liked it very much,” he said of unaided breathing. “It’s a remarkable process that is underestimated by many. Strongly recommended.”

What has the Kremlin said about Navalny’s allegations?

After Navalny’s poisoning, Putin’s first impulse was to ignore the subsequent outcry. Presidential spokesman Dmitry Peskov laughed off the German government’s conclusion that Navalny, who made a name crusading against brazen official graft, was poisoned with Novichok, a Soviet-era substance whose use carries the distinct fingerprint of the Russian security services. Upon Navalny’s return, state-run organs made repeated dark references to Western plots against Russia, suggesting he was a tool of outside powers.

More recently, the Russian leader felt compelled to respond directly to last week’s viral “Putin’s Palace” video, which Navalny and his team made while he was being treated in Germany. Putin did not acknowledge having seen the video himself — he said he scrolled through a “boring” compilation by aides — but denied that the lavish property actually belonged to him. The video didn’t say it did; it alleged that Putin proxies controlled a slush fund that had paid for the sprawling compound, said to include a casino, skating rink and vineyard. Navalny called it the “world’s biggest bribe.”

Analysts said Kremlin response to the video demonstrated a key point of vulnerability on the part of Putin and his close associates: popular fury over what researcher Maria Snegovaya called the “obnoxiously luxurious” lifestyle of Putin intimates, including oligarchs tied to the president.

Previous such exposes of official corruption “have not really involved Putin himself,” said Nixey. “What Navalny has done is engaged people’s emotions of outrage and disbelief by showing up the venality of the top man in a way that hasn’t been done before.”

That resentment seemed borne out in weekend street demonstrations, where some protesters chanted: “Putin is a thief!”

Will the protest movement have staying power?

The durability of nationwide demonstrations remains an open question. In the course of his decades-long rule, Putin has weathered bigger protests, and cracked down harder on other opponents than he has so far on Navalny’s backers. The Russian president marshals vast reserves of state power, but for the moment he appears somewhat confounded.

Analysts said a short-term indication of popular sentiment would come this weekend, with the call for new protests. On Saturday, protesters braved subzero temperatures and flareups of brutality by police, although the government refrained from using dramatic and lethal means of crushing the demonstrations.

In the somewhat longer term, elections are due in September for the Duma, or legislature, balloting that could be a barometer of discontent.

Although the crowds of demonstrators have been mixed in age, showing a broad appeal, many were young, and many were first-time protesters. “This gets back to people looking to the future, wanting to see opportunity,” said Conley.

She said many demonstrators did not necessarily hope for Putin’s overthrow but, rather, were focused on hopes that a declining standard of living could be turned around.

“They don’t want Putin to go, but they do want reforms, improvement that it seems they can’t get,” she said. “Those two trains are heading down the track for a collision.”

Back to Top
Close Add post
X
Beyond Meat and Pepsi are teaming up to make plant-based snacks and drinks…WorldPlant-based meat got another big corporate ally on Tuesday: Pepsi. The soda giant announced that it was forming The PLANeT Partnership with Beyond Mea…

X
Germany counts over 2.16mn Covid-19 cases in one year…World"A year ago today, not everyone realized that we would be living in a pandemic," Chancellor Angela Merkel said during her speech on Tuesday during the…
close