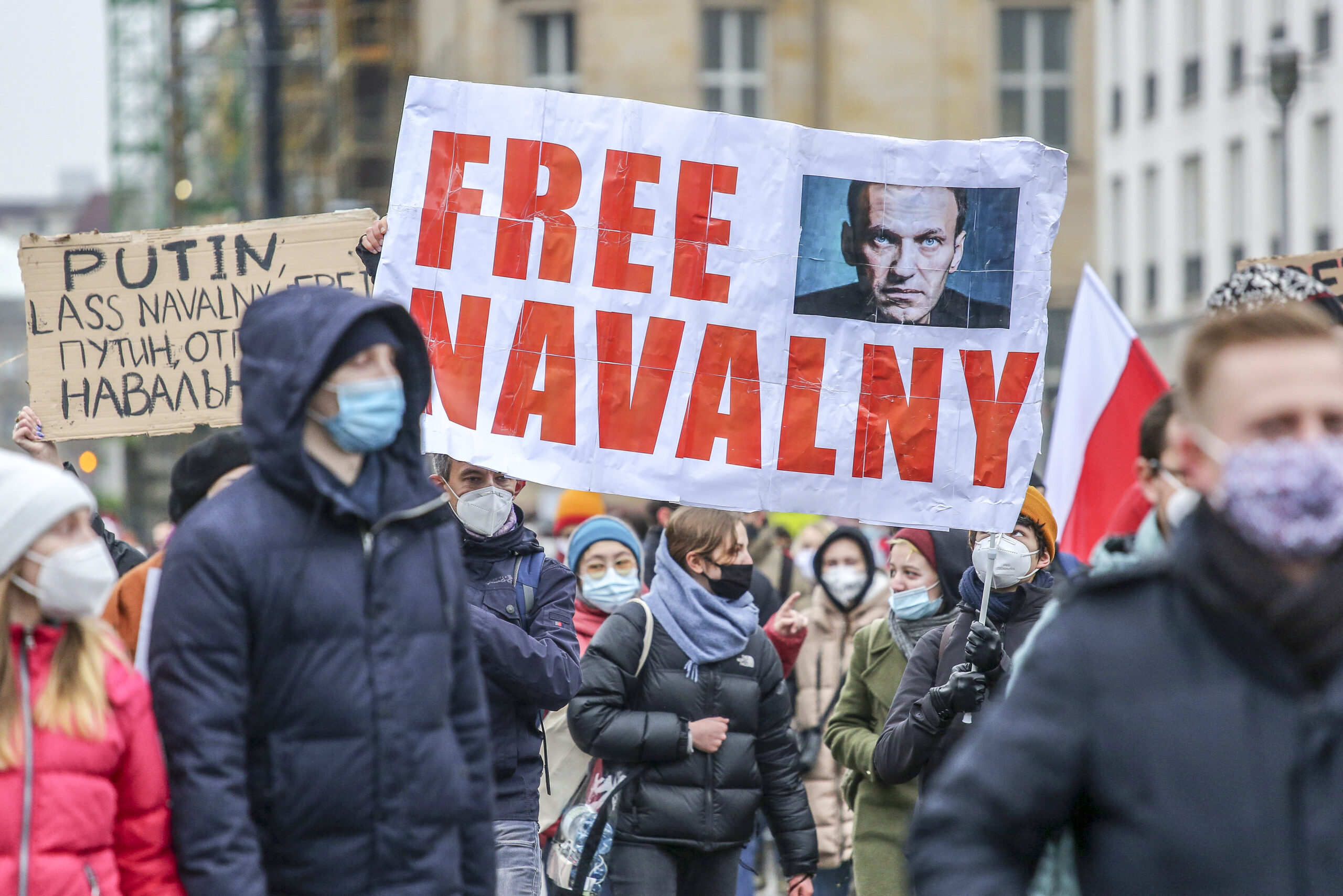 BERLIN, GERMANY – JANUARY 23: Protesters hold a banner reading “FREE NAVALNY” as some 2,500 supporters of Russian opposition politician Alexei Navalny march in protest to demand his release from prison in Moscow on January 23, 2021 in Berlin, Germany. The protesters marched from the federal chancellery through the Russian embassy to Brandenburg Gate in part also heeding a call by Navalny to protest against Russian President Vladimir Putin. Navalny, who was arrested earlier this week upon his return to Moscow from Germany, has called for protests against Putin across Russia, though Russian authorities have refused to allow them and deemed the protests illegal. Berlin is home to a large expatriate Russian community. (Photo by Omer Messinger/Getty Images)

Russian opposition leader Alexei Navalny’s Anti-Corruption Foundation, in a letter addressed to President Joe Biden, is calling for the United States to impose sanctions on dozens of Russian oligarchs and government officials, whom it accuses of political persecution, human rights abuses and corruption.

The call for sanctions comes after tens of thousands of demonstrators participated in nationwide protests last weekend after Navalny was arrested as soon as he returned to Russia from Germany.

Navalny spent months recuperating in Berlin after he was poisoned by a nerve agent. The opposition leader blames President Vladimir Putin’s government for his poisoning.

“For years, Alexey Navalny has advocated sanctions against individuals who play key roles in aiding and abetting Putin and who take the lead in the persecution of those who seek to express their opinions freely and expose corruption in the system,” reads the letter.

“Existing sanctions don’t reach enough of the right people. The West must sanction the decisions makers who have made it national policy to rig elections, steal from the budget, and poison.”

The United Kingdom and the European Union imposed sanctions on several Russian individuals in response to Navalny’s poisoning last year. The U.S. has not yet done the same, though members of Congress had called for former President Donald Trump to do so.

Biden called for Putin to release Navalny in a private phone call with the Russian president. The White House has also ordered the U.S. intelligence community to review alleged Kremlin involvement in Navalny’s poisoning.

“He did not hold back in conveying his concern about the treatment of Alexei Navalny and his treatment of protesters,” White House spokeswoman Jen Psaki told reporters on Jan. 28.

In an unexpected Jan. 27 address from Putin at a virtual meeting of the World Economic Forum, the Russian president warned of an “all against all” fight if global tensions and the coronavirus pandemic are not resolved.