Home General Russian Officers Were Near Navalny When He Was Poisoned, Report Says

Russian Officers Were Near Navalny When He Was Poisoned, Report Says 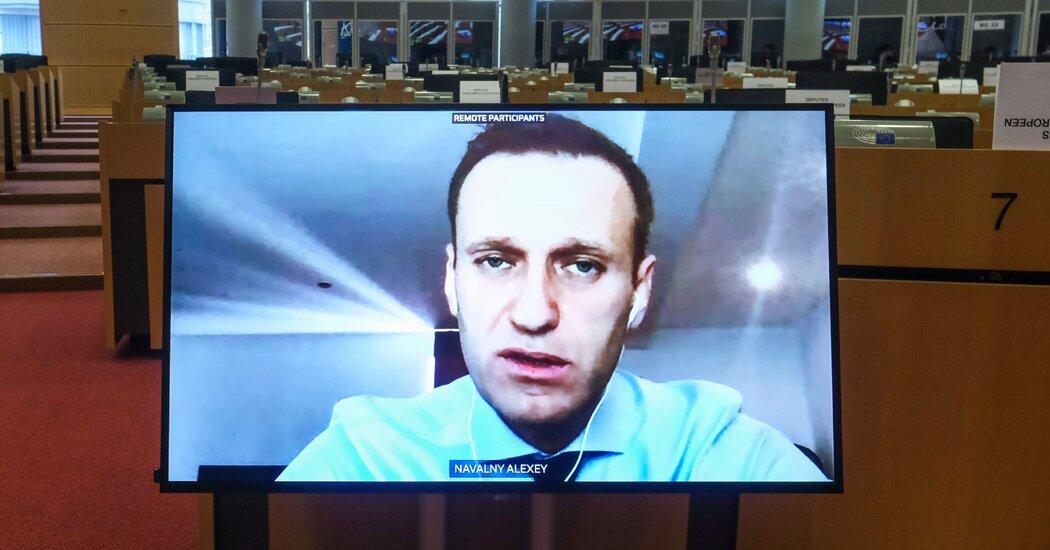 Officers from a secret Russian spy unit with expertise in poisonous substances trailed the Russian opposition leader Aleksei A. Navalny for years and were nearby at the time he was exposed to a highly toxic nerve agent that almost killed him last summer, according to a report by Bellingcat, a research group that specializes in open-source investigations.

The report, which involved an analysis of telephone metadata produced by operatives from the spy unit together with flight information obtained by Bellingcat, provides the strongest evidence to date that the Russian government was behind the assassination attempt against its most vociferous and well-known critic.

According to the report, three officers from the Federal Security Service, Russia’s domestic intelligence agency, followed Mr. Navalny to Siberia in August where the opposition leader was meeting with supporters in preparation for local elections. They trailed him to the Siberian city of Tomsk where, just after midnight on Aug. 20, telephone metadata showed one of the operatives not far from the Xander Hotel, where Mr. Navalny and his team were staying.

Hours later, shortly after taking off on a flight from Tomsk to Moscow, Mr. Navalny was heard screaming in the airplane bathroom before collapsing, forcing the pilot to make an emergency landing. By the time he arrived at a hospital in Omsk, another Siberian city, he was in a coma.

Bellingcat’s report, which was published together with the Russian news outlet, The Insider, and in conjunction with reports from CNN and Der Spiegel, also uncovered links between the spy unit and a broader program to use chemical weapons in assassinations that is run by the Federal Security Service, known as the F.S.B.

A senior German security official with knowledge of the matter confirmed the accuracy of the details in the Bellingcat report. “It covers everything that we knew,” said the official, who spoke on condition of anonymity to discuss sensitive intelligence matters.

The German government, the official said, has known for months exactly who was involved in the poisoning.

There was never any doubt that the Russian government was behind the poisoning, according to Western security officials. Mr. Navalny’s political activism, together with his extensive investigations into corruption by the Russian leadership, have long rankled the Kremlin. After initially preventing Mr. Navalny’s team from taking him abroad for treatment, Russian officials eventually allowed him to be flown to Berlin. He spent almost a month in a coma but survived.

In Germany, officials with assistance from Western spy agencies quickly surmised what had occurred. German military scientists determined that Mr. Navalny had been poisoned with a Russian-made toxin from the Novichok family of nerve agents. Those results were confirmed by labs in France and Sweden as well as by the Organization for the Prohibition of Chemical Weapons, the global chemical weapons watchdog. Two years earlier, Russian operatives traveled to England where they used a similar substance in an assassination attempt against Sergei V. Skripal, a former Russian military intelligence officer who for years had spied for the British government.

Shortly after Mr. Navalny’s arrival in Berlin, representatives from the Central Intelligence Agency and Britain’s Secret Intelligence Service provided members of the German government with details about the poisoning, including the identities of the Federal Security Service officers involved, that directly implicated the Russian government, according to the senior German security official with knowledge of the matter.

The Kremlin did not immediately comment on the report. In the past, Russian officials have strenuously denied that the government had any role in poisoning Mr. Navalny and have spun a series of outlandish alterative theories, including that it was the German government that was somehow responsible.

Mr. Navalny, who remains in Germany recuperating, released a 52-minute video to correspond with the publication of the report. In it, he directly accused President Vladimir V. Putin of using the security services to murder political opponents, while abetting massive corruption. But he also taunted the Kremlin for expending enormous resources to kill him and failing.

“There is no reason to be surprised here,” he said. “After 20 years of Putin’s leadership everything is degrading.”

“If for example the health care system is at such a level that people are dying in hospital corridors,” he continued, “then the same thing is happening in the sphere of secret operations.”

Since at least January 2017, around the time Mr. Navalny started a campaign to challenge Mr. Putin in national elections, operatives from the F.S.B.’s Research Institute — 2, also known as military unit 34435, have trailed the opposition leader closely, according to Bellingcat. Between 2017 and 2020, telephone metadata and travel booking information shows that members of the unit followed him on 37 trips by plane or train throughout Russia. They typically traveled in groups of two or three, sometimes buying tickets under their own names, sometimes under aliases.

Bellingcat obtained the data used in the report from caches of leaked Russian databases of personal information.

As Mr. Navalny pursued his ultimately failed bid for the presidency in 2017, only once did members of the F.S.B. team trailing him take a trip that did not overlap with his campaign. On April 27, Mr. Navalny had planned to travel to the southern Russian city of Astrakhan, but canceled the trip at the last minute because of an eye injury he suffered when someone threw green antiseptic liquid in his face. The sudden cancellation appeared to have caught two members of the spy unit off guard, and they flew to Astrakhan without Mr. Navalny, according to flight records.

Telephone data obtained by Bellingcat indicates that the Federal Security Service unit operates out of a facility located at a Moscow address, Akademika Vargi 2, which appears to be the same location of a secret K.G.B. laboratory that specialized in the development of poisons. In 2004, the former K.G.B. general Oleg Kalugin described the facility in an interview with the Russian newspaper Novaya Gazeta as “one of the agency’s most secretive sites.” Years later, Russian government documents leaked to the news media indicated that the facility might have been used to store the radioactive isotope, Polonium-210, that was used in the 2006 murder of Alexander V. Litvinenko, a former Federal Security Service officer living in exile in London.

It is not clear when the Russian government decided to try to poison Mr. Navalny, though in its investigation Bellingcat uncovered evidence of at least one earlier attempt. Two months before Mr. Navalny was poisoned in Siberia, he and his wife, Yulia, took a vacation to a spa-hotel in the Kaliningrad Region, an island of Russian territory wedged between Poland, Lithuania on the Baltic Sea. There, his wife suddenly became ill with symptoms similar to those later experienced by Mr. Navalny, but quickly recovered. Bellingcat determined that three members of the Federal Security Service poison unit had traveled with them.

On Aug. 12 this year, three members of the spy unit purchased one-way tickets on flights for the following morning to the Siberian city of Novosibirsk, where Mr. Navalny planned to meet with supporters involved in upcoming local elections, according to Bellingcat. One of them, Vladimir Panyaev, who traveled under his own name, is registered as living in an apartment in the same building as Mr. Navalny, according to Bellingcat. The two others, Alexey Alexandrov and Ivan Osipov, both medical doctors by training, traveled under aliases.

Though the operatives made a series of calls to their Moscow headquarters in the hours before they departed to Siberia, the calls stopped after their flights took off. Bellingcat suspects they switched to different phones for additional security while the operation to poison Mr. Navalny was underway.

But one of the operatives, Dr. Alexandrov, made an operational mistake, according to Bellingcat. On two occasions, he briefly switched on his personal cellphone, allowing Bellingcat researchers, armed with telephone metadata, to pinpoint his location. The first time, on Aug. 14, showed him in the vicinity of the hotel in Novosibirsk Mr. Navalny planned to check into later that day. The second time, on Aug. 19, indicated that he was near the hotel in Tomsk where Mr. Navalny was likely poisoned. His phone exchanged a single byte of data with the local cellphone network at 12:58 a.m.

That morning, Mr. Navalny departed Tomsk on a flight to Moscow. He began to feel the effects of the poison 30 minutes after takeoff.