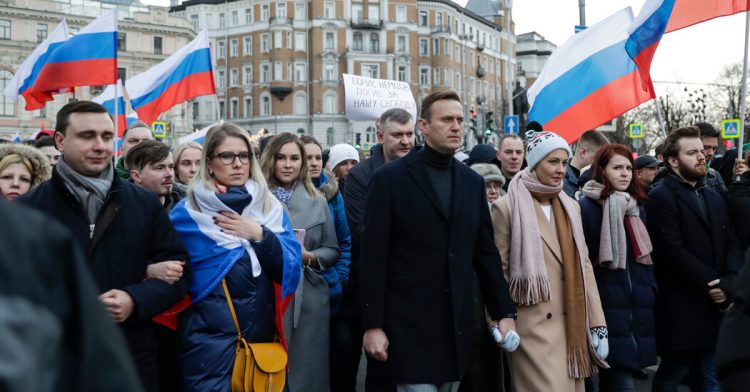 MOSCOW — The police on Friday arrested a top ally and two employees of Aleksei A. Navalny, the Russian opposition leader who over the summer narrowly survived a nerve-agent poisoning.

The arrests highlighted the extraordinary legal pressure that members of his opposition group face in Russia, which has persisted for years, and the heightened sensitivity of the authorities toward any activism related to the poisoning.

Earlier this month, Mr. Navalny and Bellingcat, an open-source investigative outlet, released a report and videos identifying members of what they said was a Russian intelligence agency squad, sent to trail and then assassinate Mr. Navalny during a trip to Siberia.

But the operation was bungled badly and its secrecy blown by information the team members left in telephone records and databases of airplane passengers, according to Bellingcat.

The accusations of a potentially lethal, almost cartoonish, plot to poison the Kremlin critic by placing nerve agent on his underpants have punctured the aura of invincibility and professionalism of one of Russia’s premier intelligence agencies, the Federal Security Service, known as the F.S.B. The Kremlin has conceded that agents trailed Mr. Navalny during the trip to Siberia, but it has denied that they played any role in the poisoning.

Mr. Navalny, who is now recovering in Germany, has taken an active role in investigating the assassination attempt. At least four activists who drew attention to the operation have been arrested.

On Monday, Mr. Navalny published online a recording of a phone call in which he said he tricked a chemical weapons expert with the F.S.B., Konstantin Kudryavtsev, into a confession by pretending to be a superior officer.

There was no independent confirmation that Mr. Navalny had indeed spoken to Mr. Kudryavtsev or that a man by that name had served on a death squad. The F.S.B., a main successor to the K.G.B., took the unusual step on Monday of issuing a statement asserting that Mr. Navalny’s call was a forgery.

In Moscow on Monday, Mr. Navalny’s top ally, Lyubov E. Sobol, tried to confront Mr. Kudryavtsev at his apartment. The police arrested Ms. Sobol but then released her after fining her 1,000 rubles, or about $13, for disobeying a police officer.

Before dawn on Friday morning, the police raided Ms. Sobol’s home and took her into custody again. Ivan Zhdanov, the director of Mr. Navalny’s Anti-Corruption Foundation, wrote on Twitter that she is now under investigation for a more serious offense of breaking and entering, which could lead to a two-year prison sentence.

Also on Friday, the authorities detained for questioning Akim Kerimov and Olga Klyuchnikova, two employees of Mr. Navalny’s YouTube channel, Navalny Live, according to a report by the channel.

This month, Clarissa Ward, the chief international correspondent for CNN, visited the apartment of another man Bellingcat had identified as an assassin. The man declined to be interviewed. Ms. Ward was not arrested.

The Kremlin has not confirmed that the men whom Ms. Ward and Ms. Sobol tried to approach are F.S.B. agents.

This week, in another crackdown on activism related to the poisoning, the police briefly detained a filmmaker, Vitaly Mansky, for protesting in front of the F.S.B. headquarters in Moscow while holding a pair of checkered blue underpants, symbolically implicating the spy agency in the poisoning.