Home General S-400 | The long Russian arms in the skies 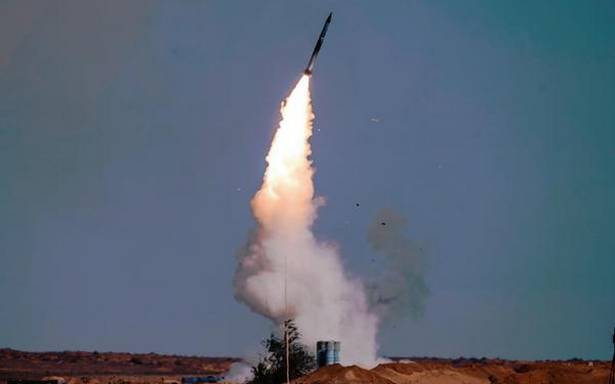 On December 14, the U.S. imposed sanctions on Turkey, a NATO ally, over its procurement of the S-400 Triumf long-range air defence system from Russia. Announcing a series of measures under the Countering America’s Adversaries Through Sanctions Act (CAATSA), Assistant Secretary for International Security and Nonproliferation, Christopher Ford, also cautioned other countries: “We hope that other countries around the world will also take note that the U.S. will fully implement CAATSA Section 231 sanctions and that they should avoid further acquisitions of Russian equipment.” In October 2018, India had signed a $5.43 billion deal with Russia for five S-400 regiments.

S-400 (NATO name SA-21 Growler) is considered one of the world’s most advanced air defence systems that can simultaneously track and neutralise a range of incoming objects spanning aircraft, missiles and Unmanned Aerial Vehicles (UAVs) over very long ranges. It is especially suited to take down strategic aerial platforms like bombers, mid-air refuellers, reconnaissance aircraft and Advanced Early Warning and Control Systems (AWACS). Given their capabilities, the S-400 has emerged as one of the most controversial arms exports of Russia and a major point of contention between Washington and Moscow.

According to the Center for Strategic and International Studies (CSIS) missile defence project, development of the S-400 began in 1993 and eventually the testing of the system started in 1999. Designed by Almaz-Antey Central Design Bureau, the S-400 is a successor to the S-300 system and entered operational service in 2007. In 2015, it was deployed in Syria by Russia to protect its military assets and has also been deployed in Crimea.

The S-400 is fully mobile and each system has a 3D phased array acquisition radar, which can track around 300 targets up to 600 km, a command-and-control centre, automatic tracking and targeting systems, launchers and support vehicles. Each system has four different types to missiles for up to 40 km, 120 km, 250 km and a maximum range of 400 km and up to 30km altitude. The different ranges and varying altitudes create a layered air defence net. An S-400 battalion has eight missile launchers, typically with four missiles each.

India’s S-400 deal is well under way and initial issues over payment channels have been resolved. Russian officials have stated that deliveries would begin by 2021-end. The system would complement India’s indigenous Ballistic Missile Defence system developed by the Defence Research and Development Organisation and create a multi-tier air defence over the country. Indian Air Force (IAF) officials have stated that the S-400 would be seamlessly integrated into the country’s existing air defence network. Given its long range, the system, if deployed towards the western borders, can track movements of Pakistan Air Force aircraft as soon as they take off from their bases.

For the IAF, the high-end technology S-400 would give a fillip and make up for its falling fighter aircraft squadrons in the medium term. Former Chief of Air Staff Air Chief Marshal B.S. Dhanoa had on several occasions termed the S-400 air defence systems and Rafale fighter jets “game changers” for the IAF.

Globally, there has been a growing interest for the S-400 with several countries expressing interest in the system. In addition to Turkey, in July 2018, China became the first export customer to receive the S-400 and got sanctioned by the U.S. under CAATSA. India, in addition to S-400, has signed several other major defence deals with Russia.

India is also acquiring several high-end military platforms from the U.S., which includes P-81 maritime reconnaissance aircraft, AH-64E Apache attack helicopters and CH-47(I) Chinook heavy lift helicopters, and recently leased two MQ-9B Predator high altitude long endurance drones. In addition, negotiations are in an advanced stage for procurement of the National Advanced Surface to Air Missile System. While Trump administration has not invoked CAATSA sanctions so far, it is not clear if the U.S. would continue to do so. The issue would come up before the incoming Joe Biden administration most likely when India starts taking the deliveries next year.