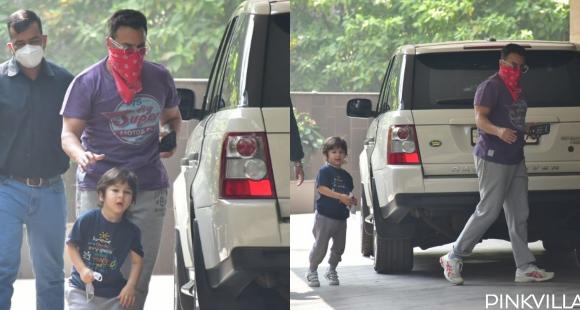 Saif Ali Khan was snapped at his building with his son Taimur Ali Khan this afternoon. The Tandav star seemed to have been caught off guard and hence he quizzed paps about it.

Actor Saif Ali Khan recently made his way back from Jaisalmer after shooting with Arjun Kapoor for Bhoot Police. Amid the Tandav controversy, Saif returned home to Kareena Kapoor Khan and Taimur Ali Khan. While security has reportedly been increased at Saif”s new house, the actor was snapped this afternoon at his building with his son. However, it seems that the Tandav star was caught off guard by the paparazzi when he was getting out of the car and walking towards his building with Taimur.

In a video, we can see Saif questioning something to the paparazzi after which his guards can be seen signaling the photographers to leave. Hearing this, paps too can be heard saying ‘sorry’ and leaving. In the photos and video, we can see Saif clad in a purple tee with grey sweatpants and sneakers. He is seen with a red bandana around his face and a cool pair of sunglasses. On the other hand, his son Taimur seemed to be in a fun mood.

As Saif got out of the car, he put Taimur down and then the little munchkin can be seen walking behind his dad. He is seen sporting a blue tee with grey sweatpants with sneakers. He is seen holding his mask in his hand. The little one is seen mumbling something as his dad Saif questioned the paparazzi.

Take a look at the photos and video: Meanwhile, Saif’s recent web series Tandav has been under fire as the Ministry of I&B had summoned Amazon Prime Video India officials and asked them to make necessary changes to the show. The makers have made the changes. However, several FIRs have been filed in different states against the makers. The series has been created by Ali Abbas Zafar.