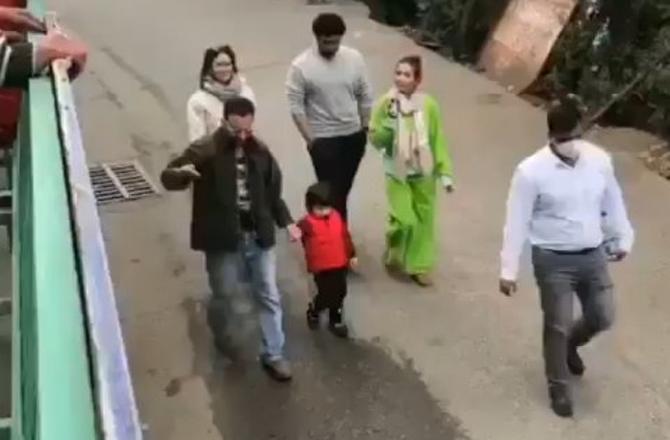 The entire team of Bhoot Police, a horror-comedy that stars Saif Ali Khan, Jacqueline Fernandez, Arjun Kapoor, and Yami Gautam, is currently in Dharamshala for the shoot. A video has now gone viral on social media where Saif, Kareena Kapoor Khan, Arjun Kapoor, and Malaika Arora are enjoying a walk, and they have the company of the munchkin Taimur Ali Khan.

And as always, given the toddler’s unpredictable nature, he began to blabber and it seems he was shouting ‘Go go go.’ A fan-club of the Omkara actor took to its Instagram account to share the video, have a look right here:

“We will film the first schedule in Dharamshala, followed by stints in Dalhousie and Palampur. The idea is to shoot a chunk in the first schedule; we will wrap up the rest in January,” said director Pavan Kripalani.

While the picturesque hill stations lend themselves naturally to the script of the horror-comedy, the director says the team’s choice of locations was determined by a more pressing factor. “[Shooting under current circumstances] is definitely a risk, but for how long can we be sitting at home? Himachal is one of the safest locations in our country. The number of cases is low and the region hasn’t witnessed [rampant] spread of the infection.”

Coming to Kareena, she recently completed two decades in Bollywood. She began her career with JP Dutta’s Refugee in 2000 and became a star as years passed by. She went on to do films like Mujhe Kucch Kehna Hai, Kabhi Khushi Kabhie Gham, Hulchul, Omkara, Jab We Met, Golmaal Returns, 3 idiots, Golmaal 3, Ra. One, Heroine, Singham Returns, and Bajrangi Bhaijaan.