Saira Banu: Dilip Kumar had left me on our engagement day for his ex-girlfriend; came back later 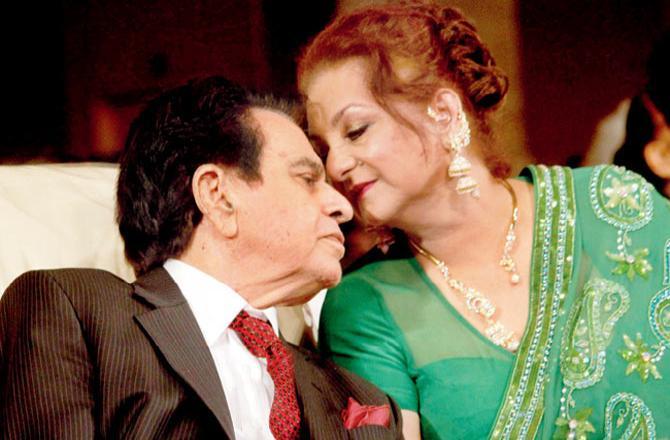 Veteran stars Dilip Kumar and Saira Banu’s love has stood the test of times. The couple married in 1966, and the bond between them is growing stronger and stronger. They have an age gap of 22 years. Recently, in an interview, Saira Banu talked about the love of her life and how she has stood with Dilip Sahab like a rock.

The Junglee also revealed some unknown secrets about their love life. Apparently, Dilip Kumar had to leave his engagement ceremony when he got to know that his ex-girlfriend had popped sleeping pills. Speaking to Times of India, Saira Banu said, “The day we got engaged, one girl- not from the industry- who was supposedly his girlfriend and had been almost up to the altar with him, took sleeping pills. Dilip saab had to rush to her and make her understand that he’s in love with me. He pacified her and came back to the engagement ceremony. I got sort of used to such things. There were girls who would stand in front of his car and wish that the car runs over them.”

“I never minded stories of the beautiful women associated with Dilip saab. I had placed my entire trust in him. My marriage was a dream come true for me. I had pasted his pictures in my room even before we got married. The only other person who made it to those walls was Rock Hudson”, she added.

Banu also gave an update about Kumar’s health. “He’s not too well. He’s weak. At times, he walks into the hall and back to his room. His immunity is low. Pray for his welfare. We are grateful to God for each day”.

She continued, “It is out of love and not duress that I look after Dilip saab. I am not looking for praises to be called a devoted wife. Just to touch him and cuddle him is the world’s best thing that’s happening to me. I adore him and he is my breath itself.”

Recently, Dilip Kumar treated fans to a rare picture of him with his wife, actress Saira Banu. In the snapshot, the 97-year-old thespian wears a pink collar-less shirt. Saira matches his colour scheme with an embroidered pink kurta and dupatta of the same hue. “Pink. Favorite shirt. God’s mercy upon all of us,” Dilip Kumar wrote on Twitter. The image shows the couple holding hands in a garden.

Pink. Favorite shirt. God’s mercy upon all of us. pic.twitter.com/04HyuDFfAB

In August, Dilip Kumar lost his brothers – Ehsaan and Aslam Khan – to coronavirus. The actor’s brothers were admitted to Lilavati Hospital, Mumbai after they were tested positive for COVID-19. A source revealed, “Ehsaan Khan and Aslam Khan complained of breathlessness. They were advised by Dr Nitin Gokhale (leading cardiologist) to get hospitalised as their oxygen levels were quite low. The two also have a history of blood pressure and heart ailment.”

RELATED:  The Philippines’ migrant workers, and the children left behind

Aslam Khan, however, passed away on August 21, while Ehsaan Khan breathed his last a few days later on September 2.

Dilip Kumar’s wife, veteran actress Saira Banu, recently revealed to ETimes, that Kumar Saab hasn’t been informed about his brothers’ deaths. She said, “To tell you the truth, Dilip saab has not been told that Aslam bhai and Ehsaan bhai are no more. We keep every kind of disturbing news away from him. We didn’t even tell him when Amitabh Bachchan contracted COVID-19 and was admitted in Nanavati Hospital; he’s very fond of Amitabh.”

She added, “We thought Ehsaan bhai would pull through. He battled it out for more than 2 weeks. His vital parameters were stable including his oxygen level after he was admitted to Lilavati. But suddenly, there was a certain decline in his health about which I was informed by Dr. Jalil Parkar, and then his condition deteriorated further towards the night.”

We do hope both Dilip Kumar and Saira Banu remain in good health for a long time to come!

Also Read: Dilip Kumar Regales His Fans With Memories Of His Ancestral Home In Pakistan

Sharman Joshi Reveals Drama Comes Naturally To Him, “I Did Not Have...

I have got more than I could have asked for this year: Abhishek...

Deepika Padukone on her early struggle: My accent was made fun of,...

There was no slapping on Pathan sets: Source