Home EntertainmentGossips Salaar: Prabhas welcomes Shruti Haasan on board and pens a sweet birthday note for her as she joins the team

Salaar: Prabhas welcomes Shruti Haasan on board and pens a sweet birthday note for her as she joins the team 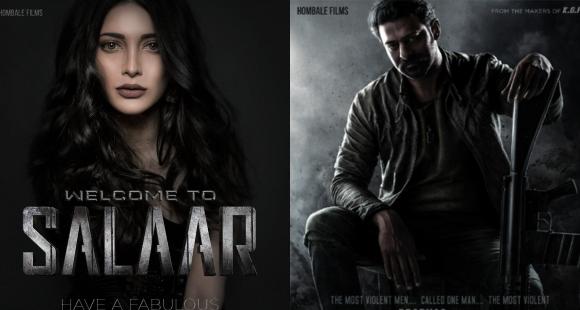 Salaar: Prabhas welcomes Shruti Haasan on board and pens a sweet birthday note for her as she joins the team

The makers of Prabhas starrer Salaar have finally dropped the much-awaited major announcement today. Hombale Films took to social media and welcomed Shruti Haasan as the female lead in Prashanth Neel directorial. Shruti Haasan joins Prabhas starrer Salaar, which is being directed by KGF fame Prashanth Neel. Prabhas welcomed her onboard and also wished Shruti Haasan on her 35th birthday. He wrote, “Happiest Birthday @shrutzhaasan ! Looking forward to working with you on #Salaar,” alongside a stunning picture of the birthday girl.

On the other hand, the makers of Salaar shared a stunning picture of Shruti Haasan and wrote, “We”re ecstatic to have you onboard for #Salaar. Can’t wait to see you sizzle on the screen.” Meanwhile, there is a strong buzz that Vijay Sethupathi has been approached to play a baddie in this upcoming big-budget film. However, there is no official word regarding the same yet.  Two powerhouse talents, Prashanth Neel and Prabhas coming together for a pan-India film and of course, expectations are rife. Moviegoers can’t keep calm to know what’s next in store for them.

She will be seen next in Netflix’s anthology film Pitta Kathalu, which is directed by 4 talented filmmakers Tharun Bhascker, B V Nandini Reddy, Nag Ashwin and Sankalp Reddy.