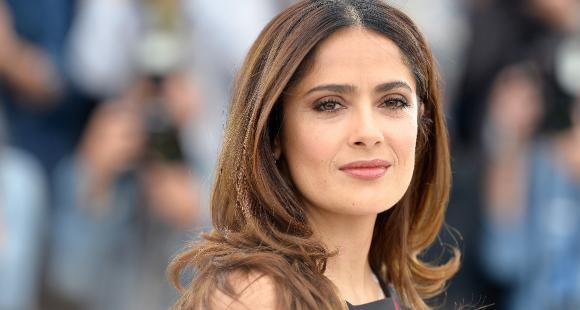 House of Gucci, the much-anticipated film, has added another celebrity to their star-studded cast. Scroll down to see details of Salma Hayek’s role in the fashion film.

Salma Hayek will be joining the cast of the production, which includes Lady Gaga, Adam Driver, Al Pacino, Jeremy Irons, Jared Leto and Jack Huston, Deadline reported today. The Ridley Scott-directed movie is already in production in Italy. “So happy to have my good buddy Salma join our wonderful cast! I’ve been talking with her about this Gucci project for 20 years! Now it’s happening and she is a part of it. Rid and I are thrilled!” said producer Giannina Scott.

For the unversed, The movie follows Patrizia Reggiani (Gaga), the ex-wife of Maurizio Gucci (Driver), who plotted to kill her husband, the grandson of renowned fashion designer Guccio Gucci. Salma Hayek will play Pina Auriemma, who is described as the clairvoyant friend of ‘black widow’ Patrizia Reggiani, who was sentenced to 25 years in prison after Maurizio Gucci’s murder trial in 1998.

Both Lady Gaga and Adam Driver have scored an Oscar nomination in the past. While Adam was nominated as Best Actor for Marriage Story in 2020, Lady Gaga was nominated in the Best Actress category for A Star Is Born in 2019. That year, she won an Oscar for “Shallow’ as the best song.  Are you looking forward to seeing Adam Driver, Salma Hayek and Lady Gaga create magic on the big screen? Let us know in the comments below.