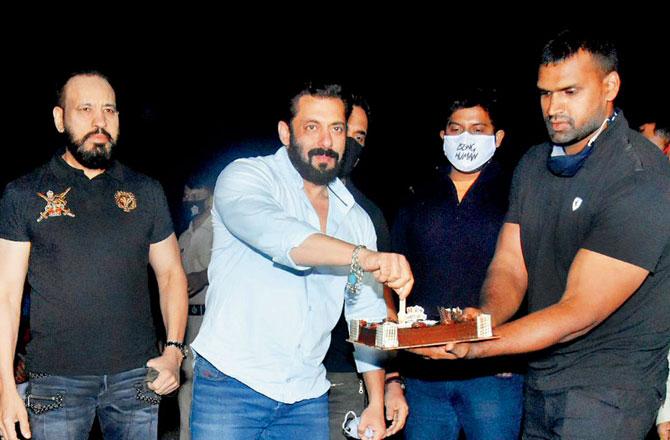 On Sunday, Salman Khan turned 55, but was in “no mood” to celebrate due to the “terrible year” 2020 has been. He stepped out of his Panvel farmhouse to interact with the media and cut his birthday cake.

“There are no celebrations this year. A lot of people from the industry have passed away. So, it doesn’t call for celebrations,” Khan said. He urged fans to follow COVID-19 protocols. Khan also informed that his next, Radhe: Your Most Wanted Bhai, will arrive in theatres on Eid 2021 provided the scenario is safe for people to visit them.

Apart from family members, B-Town folk Sunil Grover, Sooraj Pancholi, Zaheer Iqbal, Nikitin Dheer, Kratika Sengar, Ashvini Yardi, Mukesh Chhabra and Mudassar Khan drove down to Panvel to wish him. Politicians Praful Patel, Shaina NC and Baba Siddique were also present. So, it was not that there was no celebration, but a muted one.

Also Read: Wishes pour in for Salman Khan on his 55th birthday

Salman Khan was one of the first celebrities to resume work during the pandemic. He is currently busy hosting Bigg Boss season 14, which started in October this year. On the work front, Salman will be next seen in Radhe: Your Most Wanted Bhai and Antim. Speaking about the later, Antim will also star Aayush Sharma, and this will be their first onscreen collaboration. Antim.. The Final Truth is a Mahesh Manjrekar directorial, produced by Salman Khan Films. In his first look, Salman was seen in a full-fledged Sikh avatar and impressed everyone with his characteristic swag, charisma and commanding screen presence.

Apart from these two action drama, Salman Khan will also be a part of the third instalment of Tiger. It is said that Katrina Kaif and Salman will start shooting in March 2021, after completing their current commitments. It is said that the Tiger couple will fly to the Middle East for their next schedule, after wrapping up the first schedule in Mumbai.

Did you know Salman Khan is planning to join hands once again with Sooraj Barjatya for a family drama? In a media interaction with mid-day, a source shared “The film traces a couple, in a joint family, from their early days of marriage to the autumn of their lives. Sooraj has been working on the concept for almost five years. Salman had loved the idea and egged the director to develop it further. Since the superstar had a lot of free time during the lockdown, he revived the conversation around the movie and joined Sooraj as a co-writer in May.”