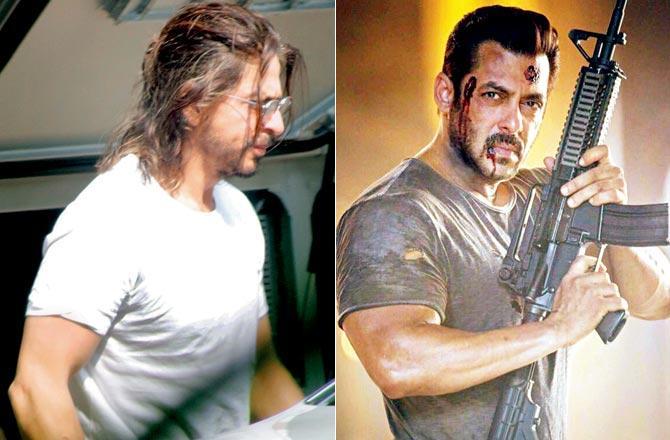 Imagine Shah Rukh Khan gunning down villains in a high-octane action sequence. Standing beside him, shoulder to shoulder, spark for spark, is Salman Khan, helping him take on the baddies. To the superstars’ legions of fans, it sounds like the perfect formula for a blockbuster. To us, it sounds like the perfect way to kick off a crossover between Shah Rukh’s Pathan and Salman’s Tiger franchise.

While it is known that Salman will make a special appearance in Pathan, mid-day has learnt that the actor will reprise his role of RAW [Research and Analysis Wing] agent Avinash Singh Rathore aka Tiger. Interestingly, Shah Rukh too essays the role of an undercover RAW agent in the actioner, which also features Deepika Padukone and John Abraham.

“It is Aditya Chopra’s [producer] vision to build an espionage thriller franchise with some of India’s biggest stars as RAW agents. While Salman and Hrithik Roshan have already begun their acts with the Tiger films and War [2019] respectively, director Siddharth Anand’s latest venture introduces SRK in the universe. Adi sir wants to begin the crossover with Pathan, and has designed a thrilling set-piece that will see.

Tiger join SRK to defeat the villains. Salman will head to Dubai for 10 to 13 days in January 2021 to shoot for his portion. It will be a 15-minute appearance in the movie,” reveals a trade source. The studio is being hush-hush about the cameo, which will be the highlight of the hyper-stylised action thriller.

The source adds that now on, almost every espionage thriller from the Yash Raj Films’ (YRF) stable will have a crossover. “Imagine Shah Rukh or Hrithik making a special appearance in Tiger 3, or Shah Rukh in War 2 — the possibilities are endless. Salman is expected to kick off the third instalment of Tiger in February.”

mid-day reached out to YRF, which remained unavailable for comment.

Also Read: Pathan: Shah Rukh Khan’s first look to be out on this day?