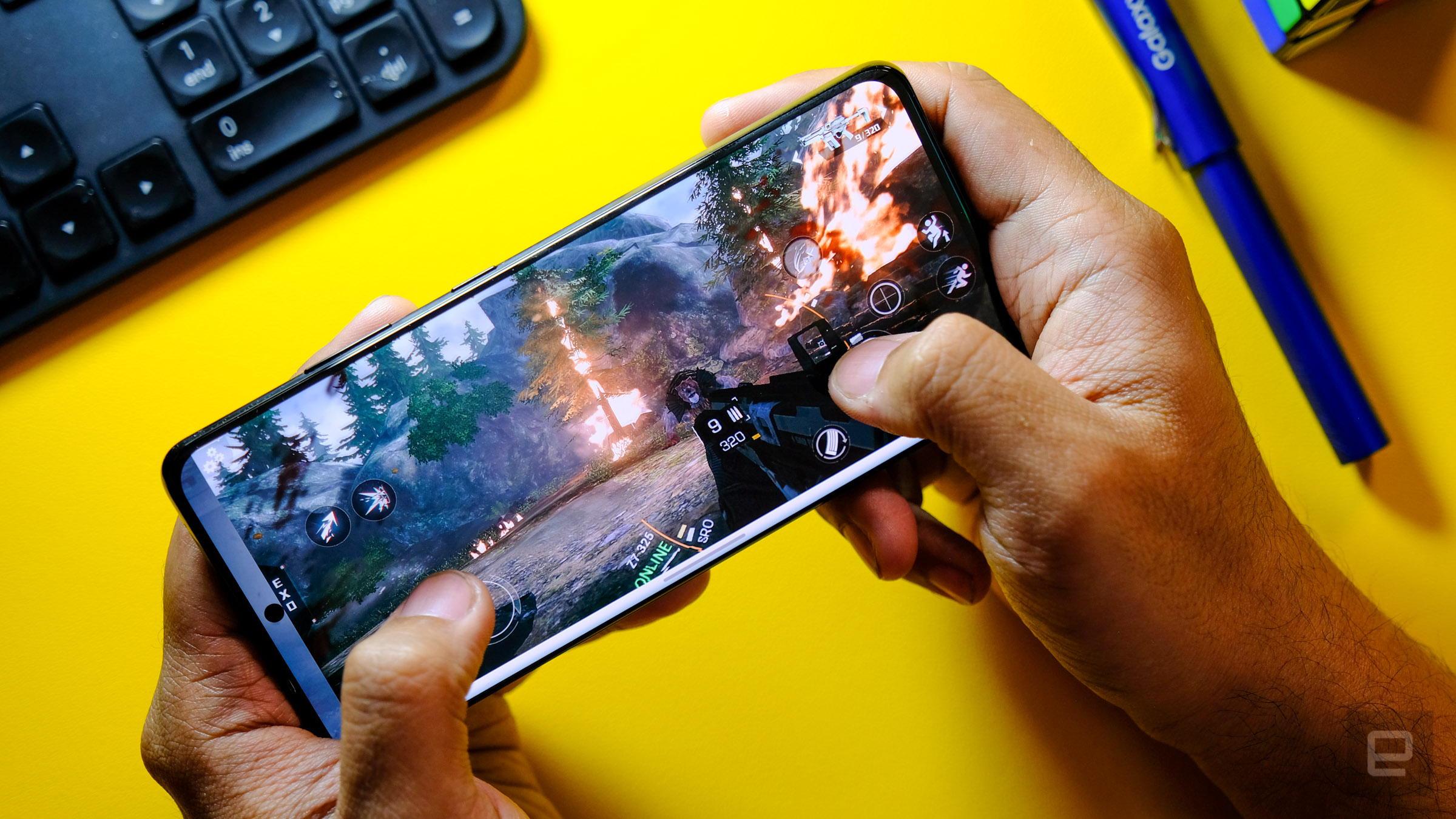 A phone that’s as dedicated to excess as the Ultra needs to offer excellent performance, and that’s just what we got out of Qualcomm’s new, 5nm Snapdragon 888 chipset. This is the first 888 phone we’ve had the chance to test, and as you’d expect, it sets a high bar for the rest of 2021’s smartphones — there’s more than enough power here to keep all your go-to apps and graphically intense games running beautifully.

That’s hardly a surprise when benchmarks point to notable performance gains over last year’s Snapdragon 865, which was already more than fast enough for most use cases and most people. What’s more, we’ve long passed the point where people routinely push their high-end smartphones to their limits, not that that’s going to stop chipmakers from pushing the envelope anyway.

I mention all this because it can be easy to take this kind of performance for granted. What benchmarks are less apt at describing is how fast the S21 Ultra feels — between that extra compute power, that 120Hz screen, and some software tweaks, the Ultra feels like the most immediately responsive phone I’ve used in a long time. (We’ll soon see if the rest of the year’s premium smartphones can replicate that feat.) And beyond that, being able to play high-fidelity mobile ports of gorgeous PC tech demos like Bright Memory never fails to impress.

Performance aside, there are some notable changes to the Galaxy S experience this year. For one, the Ultra ships with Samsung’s OneUI 3 running atop Android 11, which comes with enough tweaks that it probably warrants a full review on its own. Since this review is pretty long as-is,  I’ll just shout out a couple standout additions here.

In addition to less obtrusive message alerts and a cleaner approach to notifications, the S21 Ultra also packs Google’s excellent Discover Feed in lieu of the lousy, ad-ridden Samsung Daily. You also get Samsung Free as a possible Discover replacement and, while it’s not as immediately helpful as Google’s feed, it offers niceties like free streaming video channels. It’s odd, yes, but I’d take this over a screen full of Bixby nonsense any day. I was also really looking forward to trying Samsung’s Private Share app, which lets you securely share files and control access to them. The problem is, the feature only works as long as your intended recipient also has a Galaxy phone running the Private Share app.

Samsung started leaning into 5G with its 2020 flagship, but here we are a year later and the experience remains mixed. Our review unit came pre-activated on Verizon’s 5G network, and for the most part, data speeds were pretty much as fast — or not fast, depending on where you are — as the LTE networks we had access to before. (Note: Engadget is owned by Verizon Media, but our editorial independence remains fully intact and Verizon has no say over what we publish.)

Yes, there are occasions when you’ll happen on a mmWave node and see your download speeds shoot through the roof — we’re talking more than a gigabit per second. If you find that kind of coverage, consider yourself lucky and don’t get attached. When I tried the S21 Ultra in Bryant Park, one of the easier-to-find mmWave 5G hotspots in New York City, the difference between gigabit speeds and the status quo was often a few steps. Hell, sometimes, I didn’t even need to move: while perched on the steps near the park’s west edge, back-to-back speed tests returned wildly different results.

Point is, 5G is here and it can be pretty good depending on what carrier you’re using. But even though these networks stand to get much better with time, actual, valuable performance improvements can be harder to come by than you might expect right now. 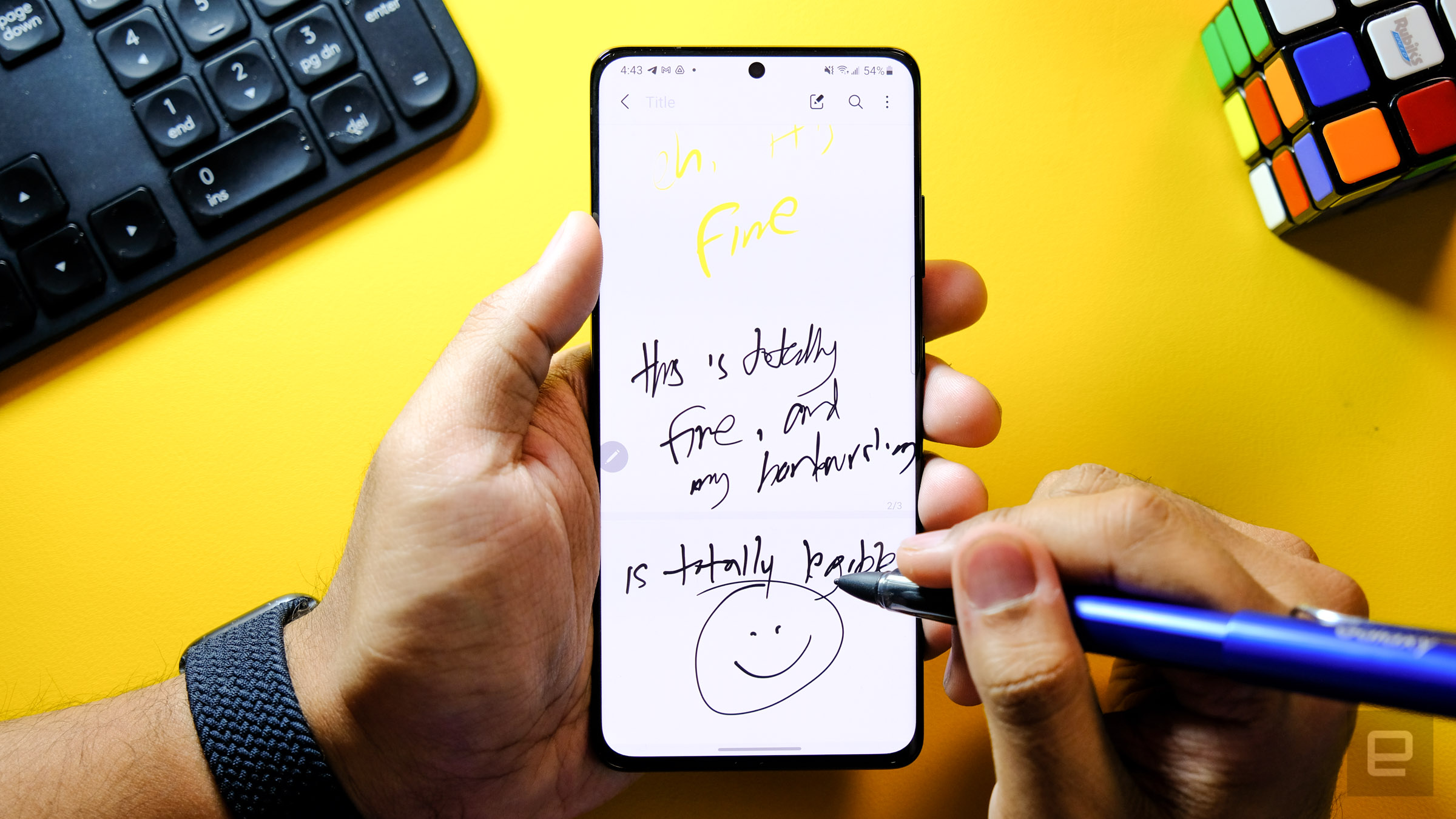 And of course, there’s the S Pen. Over the years, we’ve seen Samsung slowly release versions of its hallmark stylus for laptops and tablets, but never for non-Note smartphones until now. As mentioned earlier, that’s probably because there’s a strong chance we won’t actually get a Galaxy Note this year — or ever again, if Reuters’ reporting is on the money.

It feels weird to use one of these styluses on a non-Note phone at first. There’s a bit more latency here, so you’ll see your strokes trailing behind the tip of your S Pen. And while the S21 Ultra’s Wacom digitizer means you can still click the S Pen to access your shortcuts, you can’t do any of the remote control tricks that made the Note 20 Ultra such a joy to use. (For that, you’ll probably have to wait for Samsung’s S Pen Pro to ship later this year.) Don’t get me wrong: you can still take notes and sketch portraits with the S21 Ultra just fine, it just lacks the elegance and technical finesse that the Galaxy Note was known for.

Clearly, there’s much more going on inside this phone than usual, so how does its battery stack up? So far, the Galaxy S21 Ultra has seemed on par with devices like the Note 20 Ultra. With the screen set to Full HD, I usually finished a day of consistent use with between five to six hours of screen-on time logged and plenty in the tank left for the following morning. For many people, the Ultra will be a multi-day phone. Just know that it’s definitely possible to drain the phone in a day without much effort, especially if you run the screen at its max resolution.

Frankly, I was expecting a little better since the S21 Ultra has a 5,000mAh battery, and because the Snapdragon 888 has a built-in modem instead of a separate module. On the whole, we’re looking at quite good — not game-changing — battery life.