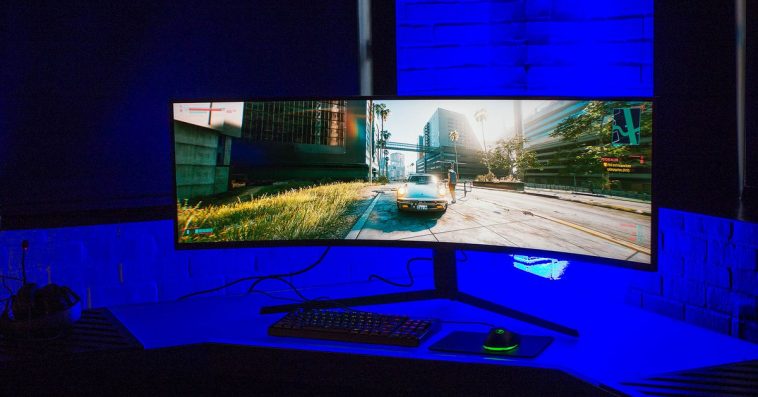 Samsung’s follow-up to the excellent Odyssey G9 curved gaming monitor is nearly here: the 49-inch Odyssey Neo G9 will cost a staggering $2,499.99 when it goes on preorder starting Thursday, July 29th. That’s nearly $1,000 more than the original, but this isn’t just a simple bump. The new Neo G9 now has a Mini LED backlit panel that can hit 2,000 nits of brightness, with full-array local dimming for the kind of deeper blacks and convincing HDR that the original didn’t quite manage.

I recently had the enviable opportunity to test out the Odyssey Neo G9 with Doom Eternal and Cyberpunk 2077, and the thing that stood out to me the most — aside from practically being enveloped in its 1000R curve — was the intense brightness of the display. Whether I was looking at the hazy skyline in Night City or staring at the hellish color palette as I ripped through demons, I was impressed by a lot of things at once: how clean the contrast appeared even as I whipped the mouse around, and how rich some of the deeper colors appeared. The desktop connected to the monitor didn’t come close to taking advantage of its 240Hz refresh rate (you’ll need a very capable machine to get the most out of this monitor), but it was still an enjoyable, immersive experience.

Like last year’s Odyssey G9, the Odyssey Neo G9 is a 49-inch curved monitor with a 5120 x 1440 resolution (it’s like two QHD displays smashed together), but several key specs have been improved, and Samsung is aligning this high-end gaming monitor with its Neo series of high-end TVs.

Mini LED is definitely the highlight: it helps the Odyssey Neo G9 display light scenes more accurately and give deeper blacks less bloom than traditional LED backlighting. In addition to that peak luminance of 2000 nits, or 2000 cd/m², Samsung says it boosted the amount of local dimming zones to 2,048 compared to just 10 in last year’s model. It also supports HDR 10 Plus.

Another new trick that’s more subtle, but still welcome, is the CoreSync feature that can sync the monitor’s rear-facing light with what’s happening in-game for deeper immersion. It can apparently do this without having to install an app, though Samsung notes that you probably won’t notice the effect unless you’re in a dark room and the monitor is right up against the wall. (Note: the blue light behind the monitor in these images isn’t being emitted from the Odyssey Neo G9’s rear light. It’s a light that Samsung installed at the press briefing.)

The Odyssey Neo G9 is Nvidia G-Sync compatible and supports AMD FreeSync Premium Pro and variable refresh rate (VRR). It retains the same 240Hz refresh rate and 1ms response time of last year’s model — no quibbles there. But Samsung also upgraded the two HDMI ports in the Odyssey Neo G9 to the newer 2.1 standard that offers enough bandwidth to allow your PC to take full advantage of its fast refresh rate and resolution over HDMI. That’s good, considering that last year’s monitor had to pull some Display Stream Compression tricks to make 240Hz work over DisplayPort, which didn’t play nice with the newest AMD and Nvidia graphics cards at their debut.

Having HDMI 2.1 with VRR also means that this monitor will support faster refresh rates from consoles down the line, should those updates happen. Currently, the Xbox Series X supports 1440p at 120Hz and up to 4K, whereas the PS5 currently supports 1080p at a 120Hz refresh rate. The Odyssey Neo G9 also features one DisplayPort 1.4 port with adaptive sync, along with a headphone jack and two USB 3.0 ports.

Here’s the port layout on the Odyssey Neo G9.

Like my colleague Sean Hollister noted in his review of last year’s model, games can still look warped around the edges in this 32:9 aspect ratio screen. I noticed this in both titles that I tried out, but hopefully more games will get proper super-ultrawide monitor support like the upcoming Halo Infinite. I’d really love to see that game running on the Neo G9.

Samsung Odyssey G9 review: the most immersive monitor you can buy

That $2,499.99 price, though. It’s clear this monitor is for enthusiast gamers who value the curved design over other advantages that some of the best OLED TVs and other high-end models bring these days. But it’s impossible to ignore that at this point, you can get a bigger OLED screen with similar features and specs, plus 4K resolution, for a similar price — or lower. The sticker shock may not be lost on Samsung, either, as it’s including a free JBL Quantum One head-tracking gaming headset with preorders.

The Odyssey Neo G9 will ship globally August 9th, and we’ll be taking a closer look at this monitor then. For now, here are a few more photos that I was able to snap at Samsung’s event.

The buttons and navigation joystick are on the bottom of the monitor toward the right side.

The blue light showing in the back wasn’t emitted from the monitor’s rear. Samsung installed it at the press briefing location.

Photography by Cameron Faulkner / The Verge