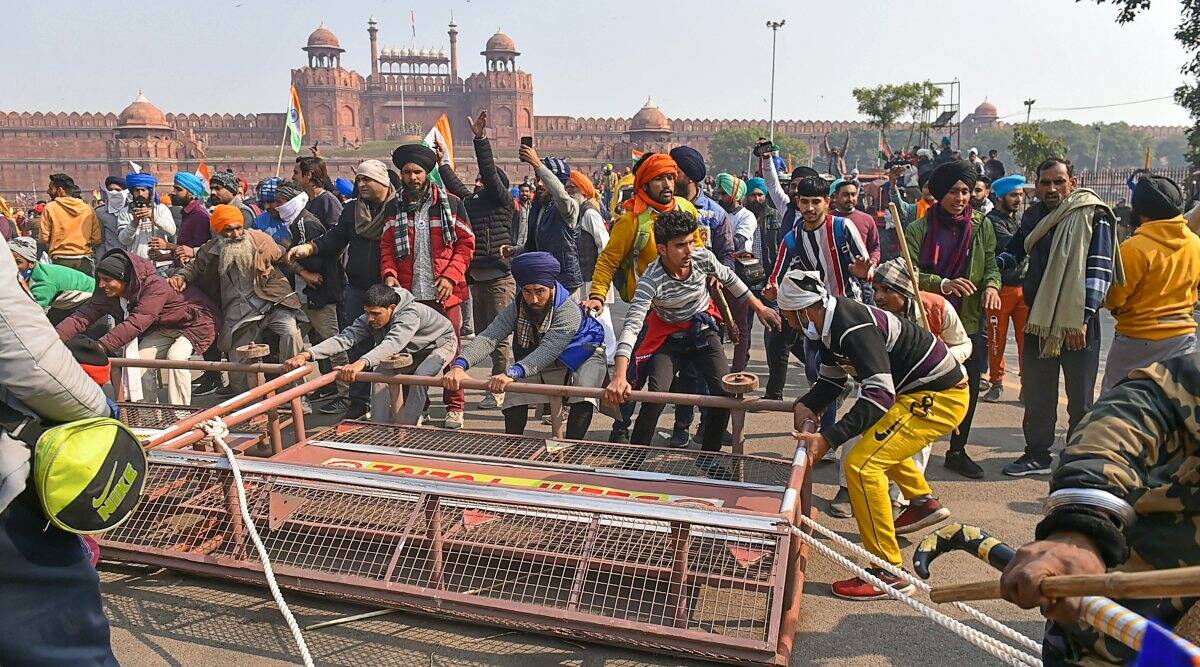 Following clashes between protesting farmers and police in the national capital on Tuesday, the Samyukta Kisan Morcha has issued a statement distancing itself from the ‘violent elements’. Groups of protesting farmers on Tuesday entered Red Fort after breaching police barricades, attacking personnel and vandalising a bus at ITO. A protester was killed near ITO after he was shot at and the tractor he was driving turned turtle. A cop has also been injured at Red Fort.

The farmers union said that the long struggle for more than 6 months now, and more than 60 days of protest at Delhi borders also seemed to have led to this situation. “We dissociate ourselves from all such elements that have violated our discipline. We appeal strongly to everyone to stick to the route and norms of the Parade, and not indulge in any violent action or anything that taints national symbols and dignity. We appeal to everyone to desist from any such acts,” said Samyukta Kisan Morcha in a statement.

“We condemn and regret the undesirable and unacceptable events that have taken place today and dissociate ourselves from those indulging in such acts. Despite all our efforts, some organisations and individuals have violated the route and indulged in condemnable acts. Anti-social elements had infiltrated the otherwise peaceful movement,” it added.

The union also said that it has been trying to get a full picture of all the events with regard to the several Kisan Parades that were planned today and will share a detailed statement soon. “Our information is that apart from some regrettable violations, the parades are underway peacefully as per plan,” the statement reads.

The chaos unfolded despite the police giving farmers camping at Delhi’s three borders — Singhu, Tikri, and Ghazipur — permission to hold rallies on specific routes, only after the official Republic Day parade at Rajpath. As per the agreement, farmers were to remain in the adjoining areas of the borders and not venture towards Central Delhi. The police resorted to lathicharge and tear gas to control the protesters after they breached the barricades at the three borders.

Back to Top
Close Add post
X
Mission Paani Waterthon: Akshay Kumar walks 21 km on treadmill to spotlight problem of water scarcit…IndiaKumar also talked about easy ways of saving water. He said, for example, that guests should be offered only half a glass of water and that they can as…