Sand on Sona’s feet! Sonakshi Sinha is enjoying her vacation in the Maldives; see photos 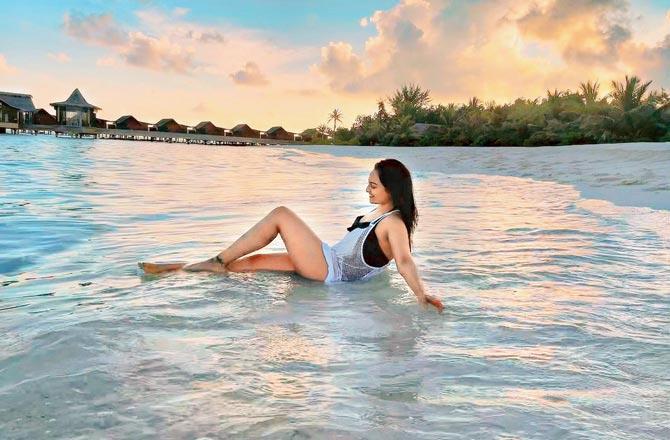 Sonakshi Sinha is the latest from B-Town to head to the Maldives. The actress, who was last seen in Dabangg 3, has taken off to her ‘happy place’. Referring to herself as ‘island girl’ and ‘happiest in the water’, Sona has been flooding her social media account with snapshots on the beachfront.

Treating her fans with the first stunning picture of her enjoying a holiday in the Maldives, Sonakshi Sinha wrote in the caption, “Happiest in the water!”

In the picture, amid the scenic view of the exotic location, Sonakshi is seen sporting a no-makeup look with a white lacy monokini and open hair.

In the second picture, Sonakshi Sinha is seen posing in front of her holiday stay in the recently posted picture. In the backdrop are palm trees and a clear blue sky. Sinha wrote, “Island Girl” with an emoticon of the island in the caption.

There’s a reason why almost every actor, in some cases with family, is heading to the country. Your guess is as good as ours.

Sonakshi will next be seen in Bhuj: The Pride Of India alongside Ajay Devgn. The period drama looks back at the story of 300 women of Madhapar village in Gujarat’s Kutch district, who played a pivotal role in helping India win the 1971 Indo-Pak war.