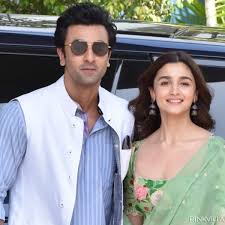 And no this is not Saawariya (Ranbir’s debut film with SLB) or Gangubai Kathiawadi (Alia’s first film with the director), the two actors were going to be paired for SLB’s project called Balika Vadhu. In the film Alia Bhatt was going to play a child-bride and she was just 12 years old at that time. The actors had met for a look-test for the film and Alia Bhatt had to place her head on Ranbir’s shoulder but she couldn’t do it. The actress had said that she was too shy to do it as she had not shared such close proximity with a guy at that time. Ranbir further adds saying that at that moment SLB thought that the young girl was flirting with him. Well, we don’t know about flirting but it must have surely been a crush and the actress is lucky one to have her crush as her beau years later.

Today on SLB’s birthday, the makers are going to drop a teaser of Gangubai Kathiawadi. In the film Alia Bhatt plays the role of a brothel owner who’s also known to be a dreaded gangster. Can’t wait to watch this powerful collaboration between Alia Bhatt and SLB.

Soni Razdan turns poetic after Alia Bhatt contracts COVID 19: This is no ordinary...