Home EntertainmentGossips Sara Ali Khan is missing the colder days as she shares an adorable PIC with her friend; Take a look

Sara Ali Khan is missing the colder days as she shares an adorable PIC with her friend; Take a look 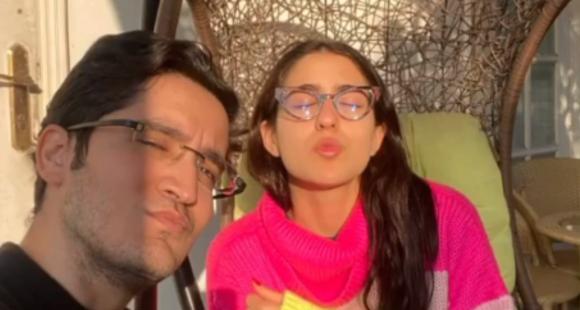 Sara Ali Khan has taken some time off her busy schedule and is holidaying in Maldives. Meanwhile, check out her latest Instagram post.

Sara Ali Khan is missing the colder days as she shares an adorable PIC with her friend; Take a look

Sara Ali Khan has been holidaying in Maldives for the past few days and is treating her fans with stunning pictures on social media. The actress wrapped up the shoot of Atrangi Re a few weeks ago post which she jetted off to the exotic locale for a mini-vacation. Be it Kaftans or be it a bikini, the diva has grabbed attention every time she shared a picture on her handle. Sara also happens to be an avid social media user.

As we speak of this, the actress has shared a throwback photo with her friend Jehan Handa on Instagram. The sun-kissed picture shows both the friends perfectly acing the ‘pout’ pose for the camera. There is no denying that Sara looks super adorable in the picture. She also adds multiple captions along with the post in which she talks about missing the colder days. For the unversed, the actress is often spotted spending time with Jehan. On the work front, Sara Ali Khan was last seen in the comedy-drama titled Coolie No. 1 co-starring Varun Dhawan last year. It also featured Paresh Rawal, Shikha Talsania, Javed Jafferi, Rajpal Yadav, and others in the lead roles. The movie has been directed by David Dhawan. The actress will next be seen in the movie Atrangi Re co-starring Akshay Kumar and Dhanush. It marks her first-ever collaboration with both the actors. It also happens to be the third Hindi movie of South star Dhanush.