Sara Ali Khan on seeing grandmother Sharmila Tagore in films: It’s confusing for me, like OMG that’s my dadi 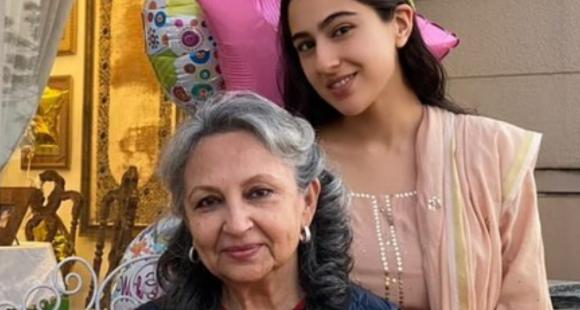 In a recent interview, Sara Ali Khan has opened up about her bond with grandmother Sharmila Tagore and talked about her excitement of watching the veteran star on the silver screen. Here’s what she says. Sara Ali Khan on seeing grandmother Sharmila Tagore in films: It’s confusing for me, like OMG that’s my dadi

It is no secret that Sara Ali Khan has great admiration for her grandmother Sharmila Tagore and often expresses her fondness for the evergreen senior star. In fact on Sharmila”s birthday last year, the Simmba star had shared a sweet note calling her a “pillar of strength and inspiration.” Now in a recent interview with ETimes, Sara has opened up about her bond with her grandmother while showering heaps of praises on the veteran actress. She said she is lucky to have Sharmila in her life and branded her as the epitome of “dignity and grace.”

Not just this, the Coolie No. 1 actress also called the legendary actress an “extremely maternal and loving grandmother.”  Sara also stated that watching her grandma on the silver screen is ‘amazing’. The leading daily quoted her as saying, “If I watch ‘Aradhana’, and ‘Mere Sapno ki Rani’, I’m like, Oh my God, that’s my dadi! Like, are you serious? Because she’s just superb, you know, she’s a star. I think she’s the first star in my opinion.”

She added sometimes “it’s almost confusing for her to believe that if Sharmila is her grandmother”. She said, “You know, it’s weird. It is very strange. But, I mean, she’s amazing. And I’m very lucky to have her in my life.”

On the work front, Sara was last seen with Varun Dhawan in Coolie No 1. She will next be seen in Atrangi Re with Akshay Kumar and Dhanush. The film has been directed by Aanand L. Rai and marks Sara’s first outing with the Khiladi Kumar and Raanjhanaa star.

Also Read:Sara Ali Khan goes out exploring the wilderness with her BFF & gives us glimpse of their bond with a cute PIC