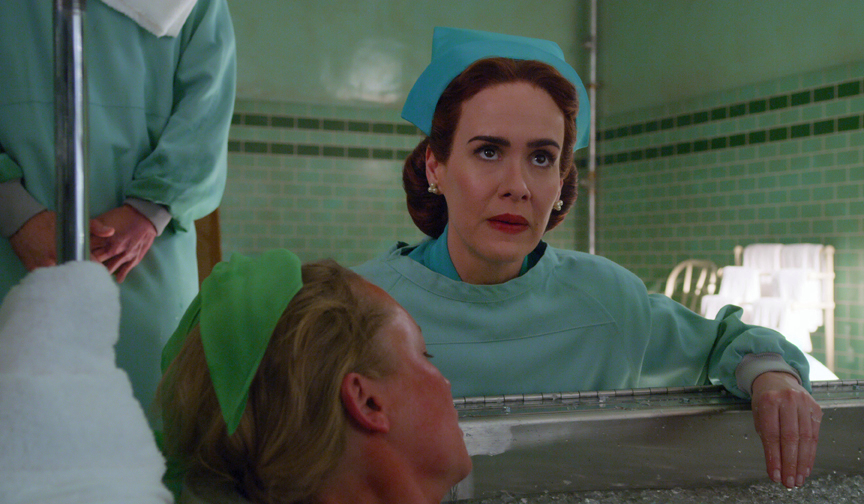 Not only did Sarah Paulson notch her fourth and fifth Golden Globe nominations this morning, but it repped the first time she was lauded in her new role as an EP on a Ryan Murphy show, this time for Netflix’s One Flew Over the Cuckoo’s Nest inspiration, Ratched, in which she plays the younger days version of by-the-book, acerbic nurse (made famous by Louise Fletcher), Mildred Ratched. Paulson also received a Globe nom in the Best Actress TV drama section.

She is busy again doing double duty as an EP and playing a complex character on Murphy’s upcoming FX series American Crime Story: Impeachment as famed double-crossing Monica Lewinsky confidante and Clinton affair scandal player, Linda Tripp. Despite Tripp’s patriotic defense on why she taped her calls with Lewinsky about the White House intern’s sexual encounters with the 42nd President of the United States, Paulson shared with us this morning how she’s able to tap into Tripp’s humanity.

“I think about something that Steve McQueen said to me when we were shooting 12 Years a Slave with him, and I remember him telling me how important it was for me to stand back from my own judgement of the character and to not sit in a space of judgement, and that it wouldn’t help me play the part, and it wouldn’t help me tell the story. So, I remember that from many years ago, and it’s something I’ve been reaching for on this part. Unlike Marcia Clarke, who was so misunderstood and vilified erroneously, this story with Linda is much more complicated. I don’t think a lot of people in life don’t stand in the mirror and constantly assess what they’re doing. I think Linda was just not one of those people who was, perhaps, not aware of just how far this story was going to go, and what her part was going be. It’s totally challenging in a way that is very exciting to me as an actor, but it’s not super easy to live inside of it as a human being,” said Paulson who won a Globe in 2017 for her turn as Clarke in the first edition of American Crime Story: The People vs. O.J. Simpson.

Impeachment was originally intended to air before the 2020 Presidential election, however, production schedule delays pre-Covid, plus the pandemic prevented that. Does the material resonate with Paulson differently post-a Biden winning election and the second House of Representatives impeachment of President Donald J. Trump?

“It’s not changed for me from our current political landscape,” says Paulson, ” I’m more interested in the gender dynamics that are in play.”

If it’s a challenge to play a person with a deplorable reputation as the late Tripp, who hard is it to play a character made famous by the previous actress’ Oscar-winning performance?

Says Paulson playing Mildred Ratched, “The most important thing for me to do was to honor Louise Fletcher by taking her fundamental characteristic which was her stillness. If I can start there, then I can at least, have this spine of her right in the way. It was sort of borrow from the greats. I think Louise Fletcher did this so brilliantly, it’s very brave to be still and to be quiet and to let the audience come through in a way.”