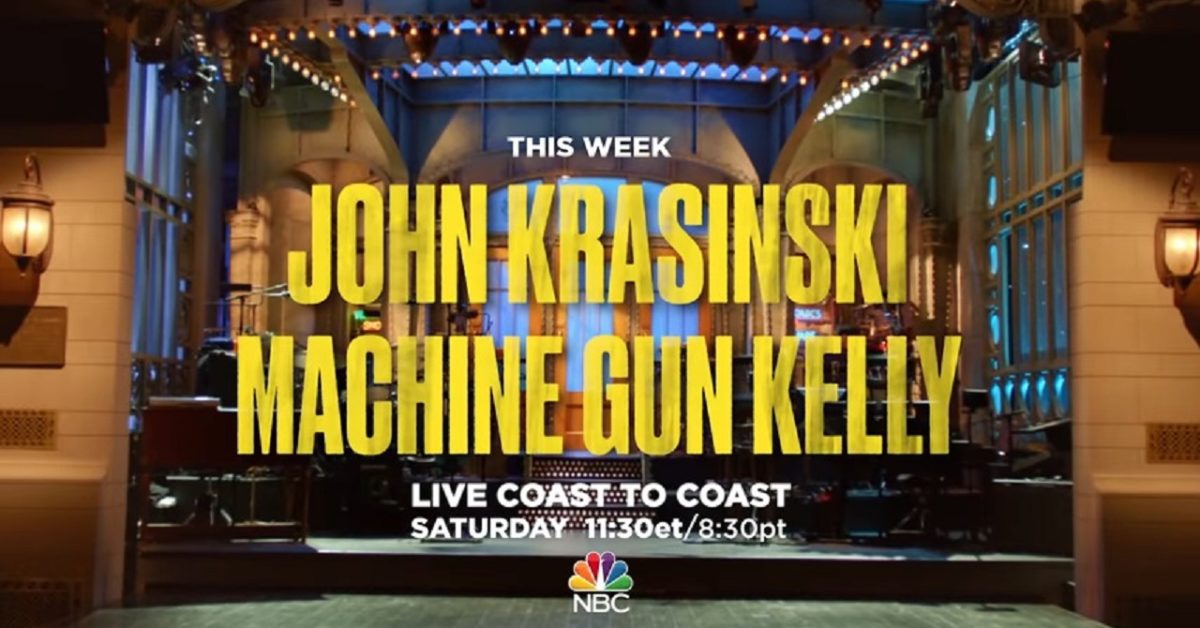 With only hours to go until host John Krasinski (The Office, A Quiet Place Part II) and musical guest Machine Gun Kelly (MGK) hit the stage to kick off the first episode of NBC’s Saturday Night Live for 2021. Earlier today, we reported how MGK would be dedicating a song to his aunt and uncle, with who he used to watch SNL when he was younger. Now, viewers are getting a look at how he’s been spending the day in New York City- beginning with a very visible arrival at Studio 8H with Megan Fox:

From there, a little insight into his backstage and dressing room area:

Now we have a look at MGK’s unofficial past with SNL, courtesy of cast member Pete Davidson. Starting with the story of how he crashed the SNL Christmas party with Davidson, MGK follows up by explaining how he used to crash on Davidson’s couch while SNL filmed and talk about being booked on the show one day:

throwback to @nbcsnl christmas party that i wasn’t invited to but showed up anyway pic.twitter.com/CsXhLxX3FO

i used to chill on Pete’s couch in his office while they’d be recording SNL when i’d come to new york and be like
“fuck, i can’t wait till they book us to perform”

In the two promos released earlier this week, SNL cast member Heidi Gardner reminded Krasinki of the pressures that come with hosting for the first time… the first episode back from break… on the first show of the new year… taking place on the first SNL Saturday post-Trump. And then there’s the matter of disappointing Kelly, who lets Krasinksi and Gardner in on a little “family history” about his name. And don’t forget that next Saturday brings first-time host and musical guest Dan Levy (Schitt’s Creek) and Phoebe Bridgers take the reigns. On February 13, Regina King (Watchmen, One Night in Miami) and musical guest Nathaniel Rateliff take the helm (with the hosts/musical guests for the February 20 and 27 shows not yet announced):