Taking a jab at UP chief minister Yogi Adityanath who is campaigning in the GHMC polls for BJP, KCR said the state, which is in 28th position in terms of per capita income, was trying to teach lessons to Telangana, which is in the fifth position 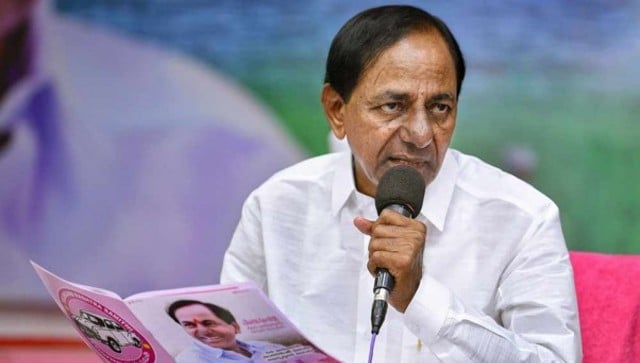 Hyderabad: Seeking support for TRS in the Hyderabad civic polls, Telangana chief minister and party president K Chandrashekhar Rao on Saturday alleged that some “divisive forces” were trying to enter the city to disturb peace and tranquility.

“Some divisive forces are trying to enter Hyderabad and create havoc in the city. Are we going to allow it? Are we going to lose our peace? My dear brothers and sisters of Hyderabad… as Chief Minister of Telangana, I am appealing earnestly, please come forward. Please support TRS, which is a progressive thinking party. Please save Hyderabad from these divisive forces,” he said addressing a public meeting, apparently referring to BJP.

Taking a jab at Uttar Pradesh chief minister Yogi Adityanath’s campaign in the Greater Hyderabad Municipal Corporation polls for BJP, KCR said the northern state, which is in 28th position in terms of per capita income, was trying to teach lessons to Telangana, which is in the fifth position.

“As a fellow Chief Minister, I welcome him (Yogi Adityanath). The person who is in 28th rank is trying to teach lessons to the one in the fifth rank,” KCR said.

Polls for the GHMC will be held on 1 December and counting of votes will be taken up on 4 December.

Referring to the recent floods in the city, the southern satrap alleged that the Centre did not give even Rs 13 though the state had requested for Rs 1,300 crore as assistance.

He slammed the NDA government, saying that it is selling successfully-run Public Sector Undertakings such as LIC, Railways, and BHEL.

Stating that he has no bosses in Delhi, KCR said the opponents were making derogatory statements against him, which cannot provoke him. On BJP leaders coming from other places to campaign in the GHMC polls, Rao asked “Is this a municipal election or national election? A galaxy of leaders of that party are coming from all states.”

Reacting to KCR’s speech, the BJP Telangana chief spokesperson Krishna Sagar Rao in a statement said KCR’s speech has openly exposed his fear of losing GHMC to BJP in this election as over 80 percent of what he said was dedicated to “selling fear to the voters”.