Save INS Viraat from dismantling: Shiv Sena writes to Centre 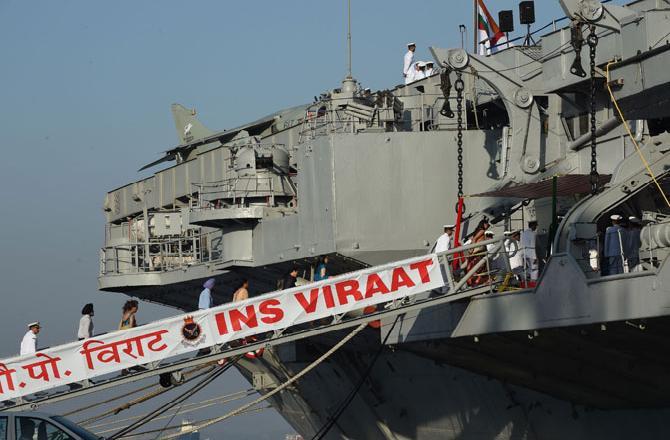 The ruling Shiv Sena in Maharashtra on Monday urged the Centre to grant a No Objection Certificate (NOC) for the transfer of the decommissioned aircraft carrier Viraat, being dismantled at Alang in Gujarat, to convert it into a museum.

In a letter to Defence Minister Rajnath Singh, party MP and spokesperson Priyanka Chaturvedi stated, “It would be a crying shame if we let go our history without giving the benefit of knowledge to our future generation.”

“Viraat’s preservation is well merited and deserving of strong consideration. It can be saved if the Government of India so desires. I am certain that the Maharashtra Government will be ready to cooperate in restoring and preserving the historic ship,” he added.

Chaturvedi pointed out that a sea harrier monument was recently dedicated to Mumbai with an aim to motivate the youth to serve the nation.

She said the monument keeps the legacy of Viraat alive.

Viraat, the world’s longest serving warship that was decommissioned by the Indian Navy three years ago, arrived off the Alang coast in Gujarat for dismantling in September this year.

The warship, which was inducted into the Indian Navy in 1987, was purchased by Shree Ram Group for a sum of Rs 38.54 crore at an auction in July this year.

Chaturvedi further said a model of INS Mumbai was also dedicated to the city of Mumbai at Worli.

“Let Viraat be a living, breathing and thriving memorial of India’s nationalism, patriotism and pride. Let us be preservers than destroyers of our rich history,” she said.

Though there is an offer to convert the warship into a museum it awaits a No Objection Certificate from the Defence Ministry for transfer of the ship, she wrote.

“Granting the NoC would help save the ship. We must use our decommissioned naval ships to help citizens better understand the significance of India’s maritime history,” Chaturvedi stated.

Viraat holds the record for being the world’s longest serving warship.

It was the second centaur-class aircraft carrier which was in service with the Indian Navy for 29 years before being decommissioned in March 2017.

There were proposals in the past to preserve it as a maritime museum.

In July 2019, the Central government said in Parliament that the decision to scrap Viraat was taken in due consultation with the Indian Navy.

It is the second aircraft carrier to be broken down in India. In 2014, Vikrant was dismantled in Mumbai.

In November, 2018, the Maharashtra government cleared an estimate of Rs 852 crore for the ambitious maritime museum project – which was to be located in Sindhudurg district along the coastal Konkan belt of the state.

In May, 2019, the Maharashtra Maritime Board (MMB) floated Expressions of Interest (EOI) for converting Viraat into an integrated tourism facility and for operating it on a Public-Private Partnership (PPP) basis.

However, there were no takers for the project.