Saweetie and Quavo break their silence on their violent CCTV; Latter calls it an ‘unfortunate situation’ 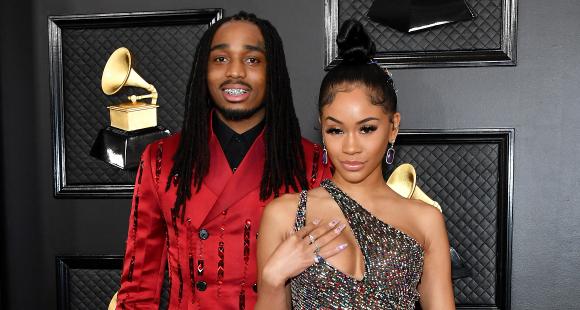 Saweetie and Quavo have finally spoken about their physically violent CCTV footage that was leaked earlier this week. Scroll down to see what the singers had to say.

Saweetie and Quavo break their silence on their violent CCTV; Latter calls it an ‘unfortunate situation’

After CCTV footage showed Saweetie and Quavo physically assaulting each other, Quavo has now finally broken his silence and spoken out. The 29-year-old Migos rapper spoke to TMZ yesterday about the leaked footage that appeared to show the pair in a physical altercation. Quavo told the outlet, “We had an unfortunate situation almost a year ago that we both learned and moved on from. I haven’t physically abused Saweetie and have real gratitude for what we did share overall.”

Saweetie issued a statement on Thursday via a spokesperson. “This unfortunate incident happened a year ago, while we have reconciled since then and moved past this particular disagreement, there were simply too many other hurdles to overcome in our relationship and we have both since moved on,” the spokesperson told Complex. Police are also now reportedly investigating the incident.

For the unversed, the CCTV footage in question shows Saweetie taking a swing at the Migos rapper, but he’s able to dodge it. Quavo then drops an orange “Call of Duty” case, which Saweetie grabs, and the two fight over it before Saweetie is knocked down to the floor and Quavo takes the case. Saweetie seemingly remains on the floor injured while Quavo stands there, looking down at her every so often. Eventually, the doors of the elevator open to a man but he doesn’t step onto the elevator. The doors open again at another floor and Quavo, 29, makes his way off of the elevator before Saweetie, 27, gathers herself and limps off as well.

ALSO READ: Quavo and Saweetie: CCTV footage shows the duo physically attacking each other before announcing their split

Saweetie Says The Elevator Fight Was Not The Reason She And Quavo Broke Up!