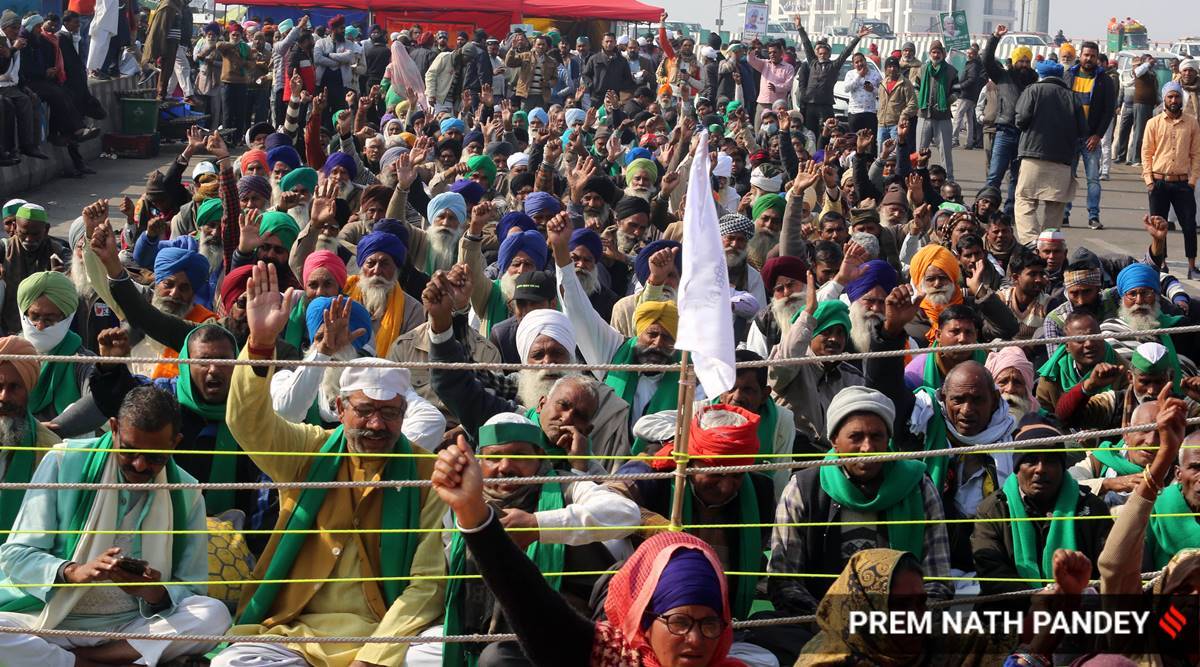 The Supreme Court Tuesday stayed the implementation of the three farm laws until further notice. The court also said that a committee would be formed to look into the negotiations to end the massive protests over the three laws near Delhi borders. Further, the top court issued a notice on the Delhi Police petition seeking to stop the tractor rally planned by farmers on Republic Day.

The court’s ruling came during a hearing on petitions challenging the farm laws and the farmer agitation at the Delhi borders. A detailed order is expected later in the day.

* Advocate M L Sharma, who is among the petitioners challenging the farm laws, told the Supreme Court the farmers are unwilling to appear before a committee. To this, the CJI replied that those “genuinely” interested in finding a solution would appear before the committee. According to Live Law, the CJI told Sharma that court is concerned about protecting the life and property of citizens affected by the farmers’ protests. “We are not seized with matters of life and death. We are hearing the validity of farm laws. We are trying to solve the problem in accordance with law. We are forming the committee so that we have a clearer picture. We want to solve the problem. We want to know the ground situation,” the Live Law quoted the bench as saying

* “This is not politics. There is a difference between politics and judiciary and you will have to cooperate”, the bench told the farm unions.

* “No power can prevent us from making committee to resolve the impasse on new farm laws. All of you who are genuinely interested to solve the problem have to go before the committee. The committee is not going to punish you,” the bench said.

* When Advocate ML Sharma complained that Prime Minister Narendra Modi was not addressing the farmers, the bench said the PM was not a party before the court.

* A day after the SC told farmer unions to send home the elderly and women, AP Singh, representing farmers union BHU (Bhanu), said the message has been passed on to his clients and they have agreed to go back, reports Live Law. The CJI tells Singh his statement will be recorded.

* The Supreme Court also raised the matter of a banned outfit allegedly infiltrating the farmers’ protest. To which Centre told the apex court that they have reports of Khalistanis supporting the protest. The top court has asked the Centre to file an affidavit by tomorrow on whether a banned organisation, ‘Sikhs for Justice’, has infiltrated the farmers’ protests.  The SC order came after P S Narasimha, who represents a petitioner supporting the farm laws, submitted the same. The Attorney General has said he will file an affidavit with Intelligence Bureau records.

* CJI Bobde also asked if the farmers have approached Delhi Police for permission to hold the protest in Ramlila Maidan. To this, the lawyers replied that they are not being allowed inside the capital. “I expect a better argument. How does not allowing prevent you from making an application?” the CJI then said, Bar & Bench reported.