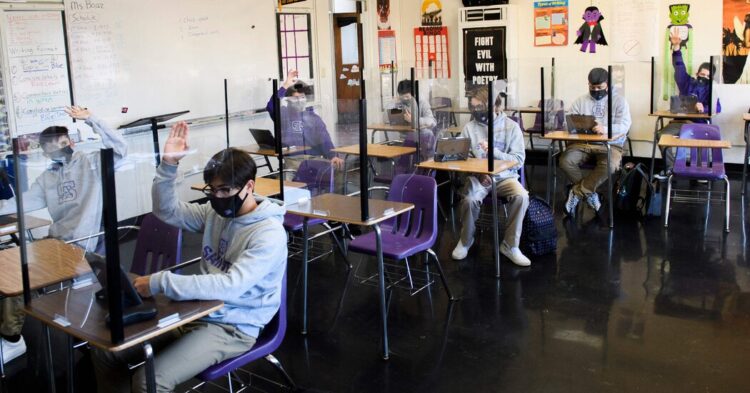 California continued its uneven progress in reopening schools on Monday, as elementary students began to return to classrooms in Long Beach, the state’s fourth-largest district with 70,000 students.

Public schools in the state’s top three districts by enrollment — Los Angeles, San Diego and Fresno — have said they will begin to allow grade-school students back onto campus later in April, as new coronavirus cases have fallen sharply across California.

Schools in Oakland and San Francisco also are scheduled to reopen next month for elementary and special-needs students. But labor agreements in both cities have allowed substantial numbers of teachers to opt out, leaving some schools without enough teachers to reopen and prompting others to scramble for substitutes.

Although many smaller California districts have been open for months, large urban districts on the West Coast generally have lagged behind their counterparts in the rest of the nation. Surging infections in Southern California after the winter holiday were partly to blame for a slow rebound in the Los Angeles school system.

Teachers’ unions generally are more powerful in Democratic-led Washington, Oregon and California than in many other states, and teachers have been wary of returning to what they regard as a hazardous workplace, despite federal guidance that elementary schools in particular are safe when health precautions are followed.

The Long Beach school district has been able to open earlier than other large California school systems because labor unions there agreed last summer to reopen as soon as health conditions permitted, and because the city was able to start vaccinating teachers earlier than other districts in the state.

Unlike most other cities in Los Angeles County, Long Beach has its own public health department, giving the city its own vaccine supplies and the power to set its own vaccine priorities, at a time when the county as a whole was making teachers wait until after other groups, like residents 65 and older, were vaccinated.

“A city with its own health department has the ability to be more nimble,” said Jill Baker, the city’s schools superintendent, who called the return to classrooms this week “exciting and momentous.”

The school district is among the city’s largest employers, and two-thirds of its students qualify for free or reduced-price lunches, so vaccinating school employees and reopening classrooms was viewed as economically important, Ms. Baker said.

About 14,000 students in Long Beach from transitional kindergarten through fifth grade will return this week to school buildings for masked, sanitized and socially distanced instruction. They will be on a hybrid schedule, with students spending about 2½ hours at school each day, five days a week, and completing the school day with remote instruction.

In-person classes for older students are scheduled to resume April 19, with grades 6 to 8 getting the option to return on April 20 and grades 9 to 11 on April 26. The last day of school will be in mid-June.