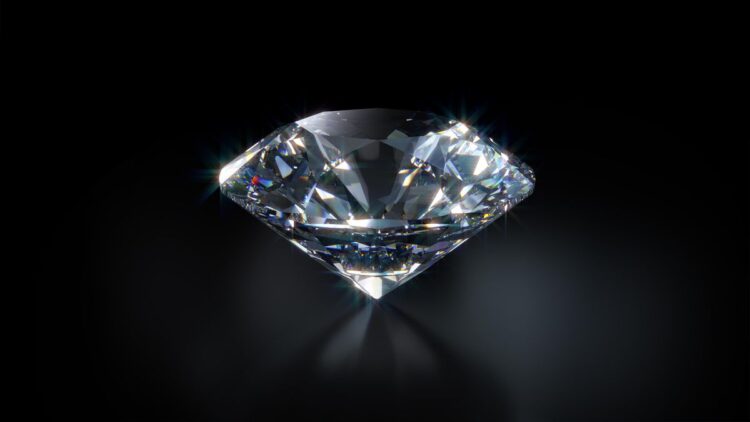 Currently, diamond is regarded to be the hardest and most scratch-resistant natural material in the world. Most diamonds found in nature and often used in jewelry display a cubic crystal structure, a repeating pattern of 8 atoms forming a cube with carbon atoms at its vertices. Each carbon atom forms six bonds to its neighbors, explaining the overall stability and hardness of the crystal structure.

Although diamonds is commonly mentioned as the hardest mineral, there are minerals that are harder. Moissanite, a naturally occurring silicon-carbide, is almost as hard as diamond. It is a rare mineral, discovered by the French chemist Henri Moissan in 1893 while examining rock samples from a meteor crater located in Canyon Diablo, Arizona. Hexagonal Boron-Nitride is 18% harder than diamond. Formed during volcanic eruptions, this mineral – so rare that it has no formal mineral name – forms microscopic small inclusions in lava rocks. But lonsdaleite, also called hexagonal diamond, since it’s made of carbon and is similar to diamond, is believed to be even stronger. Also described from samples of the Canyon Diablo meteorite, this mineral’s existence was still contested in 2014, some mineralogists arguing that it was a misidentification of diamond crystals.

Named for their six-sided crystal structure, hexagonal diamonds have been found at meteorite impact sites, and others have been made briefly in labs, so lonsdaleite – named after pioneering Irish crystallographer Kathleen Lonsdale – is now recognized as a distinct mineral. But all samples were either too small or had too short of an existence to be measured and its exact hardness was not known until now.

Now scientists at Washington State University’s Institute for Shock Physics created hexagonal diamonds large enough to measure their stiffness and also calculated their hardness. The results of their experiments are published in a recent issue of Physical Review Letters.

“Diamond is a very unique material,” said Yogendra Gupta, director of the Institute for Shock Physics and corresponding author on the study. “It is not only the strongest—it has beautiful optical properties and a very high thermal conductivity. Now we have made the hexagonal form of diamond, produced under shock compression experiments, that is significantly stiffer and stronger than regular gem diamonds.”

Researchers have long wanted to create a material stronger than natural diamonds, which could have a variety of uses in industry. The scientists used gunpowder and compressed gas to propel small graphite disks about the size of a dime at a speed of around 15,000 miles per hour onto a transparent material. The impact produced shockwaves in the disks that very rapidly transformed them into hexagonal diamonds.

Immediately after impact the researchers produced a small sound wave and used lasers to measure its movement through the diamond. Sound moves faster through stiffer material. Previously sound moved fastest through cubic diamond; in the lab-created hexagonal diamonds it moved faster, suggesting that its stiffness – the ability of a material to resist deformation under a force or pressure – is higher.

Generally stiffer materials are also harder, said lead author Travis Volz, now a post-doctoral researcher at Lawrence Livermore National Laboratory. Hardness is the resistance of a material to scratching or other surface deformations. While the researchers weren’t able to scratch the diamonds to test hardness directly, by measuring the diamonds’ stiffness, they can make inferences about their hardness. The results suggest lonsdaleite is 58 percent stronger than diamond, setting a new record.

While the industrial advantages are clear, Gupta said it is still possible hexagonal diamonds could one day be used on engagement rings. Currently lab-made cubic diamonds have less value compared to their natural peers, but hexagonal diamonds would likely be more novel.

“If someday we can produce them and polish them, I think they’d be more in-demand than cubic diamonds,” said Gupta. “If somebody said to you, ‘look, I’m going to give you the choice of two diamonds: one is lot more rare than the other one.’ Which one would you pick?”