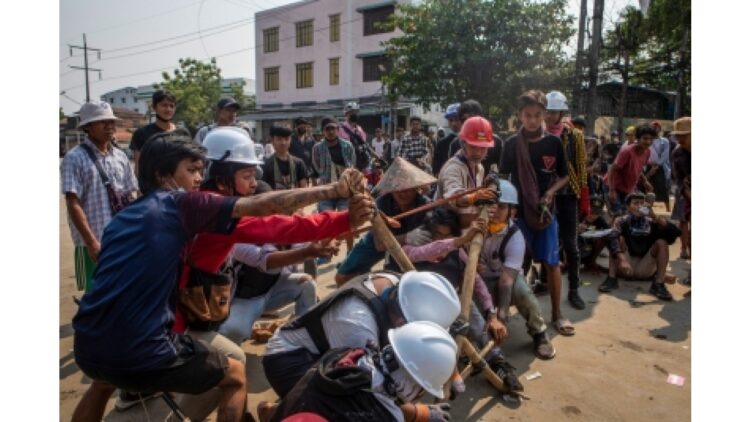 The latest violence, which reportedly left 114 people dead on Saturday, took the death toll in the suppression of protests since the February 1 coup to 423, according to Assistance Association for Political Prisoners (AAPP) monitoring group.

Protests in different parts of the country continued also on Sunday.

There were no immediate reports of deaths of deaths, however.

“Since the morning, the military has fired shots in our neighbourhoods,” Hnin Yu, a female resident, told dpa.

“People are afraid of going out and some were injured. They are still shooting.”

Defence chiefs from 12 countries on Sunday slammed the military for its use of violence against peaceful protesters.

“We condemn the use of lethal force against unarmed people by the Myanmar Armed Forces and associated security services,” read the joint statement from the US, Britain, Germany, Italy, Denmark, Greece, the Netherlands, Canada, Australia, New Zealand, South Korea and Japan.

The military chiefs urged Myanmar’s armed forces to cease violence and work to “restore respect and credibility with the people of Myanmar that it has lost through its actions.”

“A professional military follows international standards for conduct and is responsible for protecting – not harming – the people it serves.”

Myanmar’s military celebrated Armed Forces Day with parades and speeches on Saturday, turning a deaf ear to the increasingly deadly and non-stop protests against its seizure of power last month.

It is impossible to independently verify the death toll in Myanmar because of Myanmar’s crackdown on journalists and restrictions on internet use.

A tally by the independent Myanmar Now news portal reported 114 killed in 44 towns and cities on Saturday.

A count by the Irrawaddy newspaper put the toll at 59 dead, among them three children.