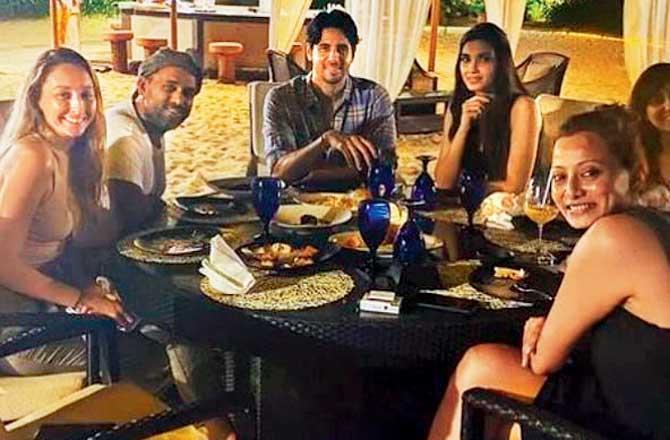 Sidharth Malhotra and Diana Penty are in Goa for the shoot of a song. Though details are under wraps, the presence of choreographer Bosco Martis has led to speculation that it is a music video. The duo are currently enjoying their time in the state.

Although neither Sidharth nor Diana has shared anything on their social media accounts, we got hold of their fan clubs who gave us insights of what happening in Goa. In the pictures, we can see Sidharth and Diana chilling with Bosco Martis. The rest of the crew has also joined the trio for the dinner party. Take a look:

Earlier, the Parmanu actress had posted pictures and videos sitting in a flight with protection including mask and shield. Actor Sidharth Malhotra can be seen sitting behind her in one of the frames. “Flying in the times of COVID ft. @sidmalhotra,” Diana captioned the image.

Diana will next be seen in the romantic drama “Shiddat”, which also stars Mohit Raina, Radhika Madan and Sunny Kaushal. She recently shared that she follows her gut feeling when it comes to finalising her scripts, and said that it has never let her down.

On the other hand, Sidharth is busy shooting for his upcoming film Shershaah. Shershaah is based on the life of ParamVeer Chakra awardee Captain Vikram Batra, an officer of the Indian Army, who fought in the Kargil War in June 1999.

PIC: Chiranjeevi cooks delicious dinner for Nagarjuna Akkineni & helps him to calm ahead...

After rally and roadshow, Shah enjoys dinner at 'dhaba'

Ranveer Singh goes on a photo sharing spree as he flaunts 4 stylish looks...

Rakul Preet Singh’s ‘Amazing Weekend’ In Goa Is All About Moonlight Kayaking, Meditation &...

Kangana Ranaut showers praise on Sanya Malhotra: You deserve everything and more